Two new on-loan signings gave a kiss of life to a relegation tussle at Firhill in which Ross County came from two goals behind to hold Partick Thistle.

Cardiff's Filip Kiss put County ahead from long-range, but that was quickly cancelled out by Sheffield United striker Lyle Taylor's powerful drive.

Taylor headed Thistle ahead and Steven Lawless extended the lead.

It denied the Jags a first home win in the league and and leaves second-bottom County one point behind the hosts.

Both sides had gone into the game with a resurgence in confidence, with Thistle having ended a run of 10 games without a win by beating Hearts last weekend and County arriving in Glasgow seeking a third straight victory.

County manager Derek Adams has been handed a mini-warchest for the January transfer window and appears to have found some firepower in central midfield through Kiss and Michael Tidser, on loan from Rotherham United, who forced Kettlewell and Alex Cooper on to the bench.

Blackburn Rovers' Jordan Slew has added power up front, but Adams will no doubt be focusing his next activity on central defence and goalkeeper.

Taylor appeared to strike terror in the hearts of Scott Boyd and Brian McLean from the outset and it was after a shot from the striker was blocked that Kallum Higginbothan forced a fine reaction save from Michael Fraser following a powerful 12-yard volley.

A poor back header from Steven McLean gave Higginbotham a sight at goal and, from the resulting corner, Conrad Balatoni should have done better than head over from close range. 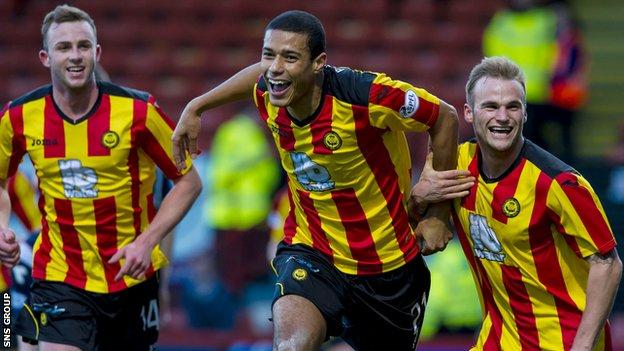 However, County looked the more creative outfit in midfield and took the lead after a string of passes around the edge of the Thistle penalty box gave the classy Kiss time to drop his shoulder before smacking a clever curler past Scott Fox from 18 yards.

The lead only lasted five minutes after Taylor, despite McLean's close attentions, managed to fire a drive from 22 yards that, despite its power, should not have squirmed through the arms of goalkeeper Fraser.

Fox clawed a Richard Brittain free-kick off the line, but it was Thistle who struck next when Taylor stole in unmarked at the front post to head home an Aaron Taylor-Sinclair cross for his third goal in two games.

The Englishman's goals dried up after his switch from Falkirk to Sheffield United, but the 23-year-old looks like making as big an impact in the Scottish top tier as he did in its second.

Taylor also started the move that led to Thistle extending their lead two minutes after the break, Higginbotham delivering the final pass that set up Lawless to finish from 10 yards.

County did not let their heads drop and struck back three minutes later when a Brittain header was cleared off the line by Taylor-Sinclair, but Gordon's low drive found the net through a sea of legs.

The visitors were now on top and, after Brittain flicked through to Kiss, the Slovakian coolly stabbed past Fox.

County's cause was not helped by Kettlewell being shown a straight red card for a studs-first tackle on Ross Forbes seconds after coming on as a substitute.

However, despite a Stephen O'Donnell thunderbolt skimming the County post in the dying seconds, the Dingwall side held on to make it five straight visits to Firhill without tasting defeat.