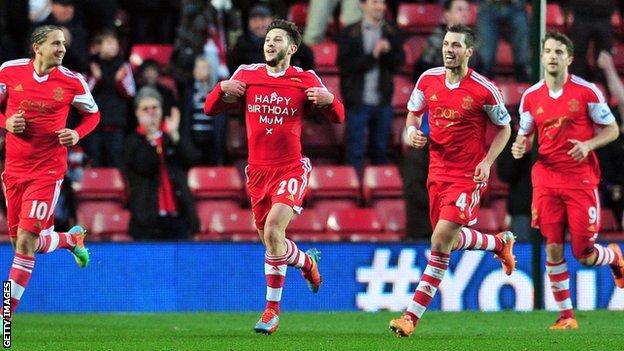 Adam Lallana struck to earn Southampton only their second win in 10 league matches as they dominated West Brom in a scrappy affair at St Mary's.

The England midfielder shot under Ben Foster after a clever pass from substitute Gaston Ramirez.

Rickie Lambert and Lallana had shots saved in the first half, before Jay Rodriguez fired wide after the break.

West Brom, with new head coach Pepe Mel in the stands, were denied late on when Artur Boruc saved from Shane Long.

Mel, who will take charge when the Baggies host Everton in their next league game, will inherit a side with one win in 11 matches and their lacklustre display on the south coast underlines the job in hand.

West Brom's effort could not be questioned and emphasised why caretaker boss Keith Downing had suffered defeat just once in four matches ahead of kick-off, but his side's attacking intent was almost non-existent.

All too often they invited pressure, before changing tack after Lallana scored his sixth goal of the season to cap a typically busy display.

Downing's side opened the game in disjointed fashion and Steven Reid's wayward shot from 35 yards was all they had to show for their first-half endeavour.

Ahead of kick-off, Adam Lallana had been dispossessed 48 times this campaign, more than any other player in the Premier League.

Southampton, despite their positivity, were unable to penetrate their opponents' defence, prompting wayward efforts from range by Lambert and Rodriguez.

Since the 4-1 rout of Hull in November, Mauricio Pochettino's side have slipped from third to ninth, but they showed more willing in a second half in which their visitors looked happy to settle for a point.

Rodriguez seized upon a loose Youssouf Mulumbu pass but smashed a shot wide as the visiting defenders retreated, but Southampton were yet to forge a clear opening.

West Brom frustrated their hosts. often keeping 10 men behind the ball, but it was the introduction of Ramirez which led to their defence being breached.

The Uruguayan's lofted first-time pass from out wide found Lallana in space and the midfielder, who scored his first senior goal against West Brom in 2008, drilled home from 12 yards.

The introduction of Baggies top scorer Saido Berahino offered the away side a much-needed edge late on, but it was Long who nearly equalised.

Liam Ridgewell's cut-back found the striker unmarked five yards from goal but Boruc, back after eight games out injured, produced a stunning save with his left leg.

"I think the evolution as of late has been good, I think the team has progressed a lot.

"I think the team as of late has been playing better, but it has been lacking defensive solidity.

"I think Pepe Mel would have seen us an organised side. Without the ball we restricted Southampton to not many opportunities, not clear-cut opportunities anyway.

"We are all disappointed about what we did with the ball and credit to the opposition, they don't give you time and quickly press you as soon as they lose it.

"I think he will work on us in terms of possession and creativity, but I thought there was commitment in terms of the team defensively."