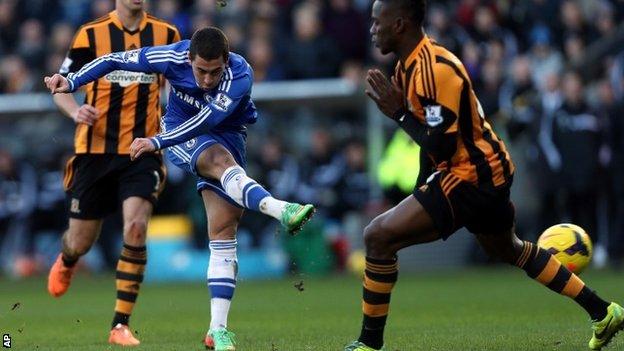 Chelsea moved to the top of the Premier League as goals from Eden Hazard and Fernando Torres gave them victory over a resilient Hull at the KC Stadium.

With Manchester City playing on Sunday and Arsenal on Monday, the Blues took advantage with their eighth win in their past 10 league games.

Hazard opened the scoring 11 minutes after the break when he fired a low strike past Allan McGregor.

Torres added a second with another low shot, from 18 yards, to seal the win.

And with goalkeeper Petr Cech beating Peter Bonetti's club record with his 209th clean sheet, Chelsea showed they are in a good position to push title challengers City and Arsenal all the way.

That said, apart from twice picking the ball out of net and one remarkable save from Oscar, McGregor had little to do.

Chelsea's Petr Cech is the second goalkeeper to keep 150 clean sheets in the Premier League after David James, who kept 169.

And Hull manager Steve Bruce will be happy with how few chances the visitors had at the KC Stadium, where his team had only conceded six goals this season prior to today.

However, they were made to realise the cream of the Premier League can make the most of what little they do create.

And in the case of Chelsea, they have two magicians who can punish the most disciplined of defences - Juan Mata, who was on the bench, and Hazard.

Mourinho has rightly eulogised about Hazard, who joined the club in 2012, and this week dismissed reports Paris St-Germain wanted to sign him.

The Belgian forward scored his 11th goal of the season in typically dazzling style. The move was started by David Luiz, who drove towards goal before passing to Ashley Cole. The England left-back's deft flick set Hazard free, and he ran along the edge of the area and feigned to shoot before his brilliant strike beat McGregor to his left.

The visitors should have added a second when Brazil forward Oscar, who forced a great save from McGregor in the first half, nonchalantly tried to place the ball past the keeper from eight yards, but instead saw his shot blocked by Curtis Davies.

Chelsea made sure of the victory with three minutes left of normal time, when Torres, who had been well marshalled, raced towards the area before shooting into the bottom corner.

Hull only forced Cech into making two good saves - from long-range Ahmed Elmohamady and Jake Livermore efforts in the first half.

"We want to win the league if we can and hopefully clean sheets will help us achieve our targets.

"Now we're top of the league for the first time in a long time and hopefully we can stay there.

"We hope to keep going. We are getting better and today was a very difficult game. But we were very solid and good in attack and that's why we score goals."

"If we're being honest it was arguably our poorest performance against one of the big teams.

"When you play against the big teams you have to play really well. Today we didn't pass it well enough and kept giving away possession

"Our goalkeeper made great saves to keep us in it. They are a wonderful side and have just gone top of the league."