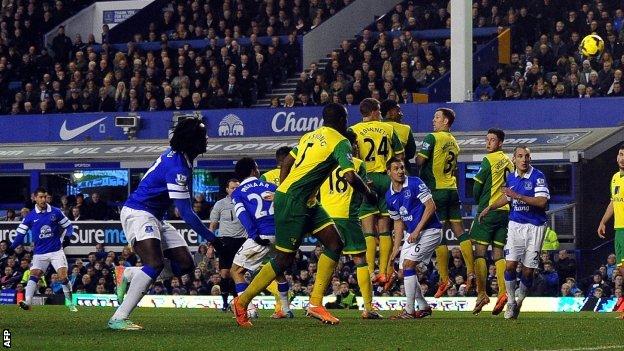 Everton moved into the Premier League top four as they comfortably beat Norwich to leave the Canaries winless in six league matches.

Kevin Mirallas's free-kick from 20 yards doubled the lead after the break as Everton eased to victory.

Robert Snodgrass headed against the post late on for the visitors before Ricky van Wolfswinkel shot wide.

Everton unveiled Republic of Ireland winger Aiden McGeady on the pitch before the game, having completed his signing from Spartak Moscow on a four-and-a-half-year deal.

The 27-year-old was wanted by Roberto Martinez at Wigan last season but will know he has a fight on his hands to earn a regular starting place as Everton continued their sparkling form this season.

Martinez's career as Everton manager could hardly have started better, with the Toffees going into the game five points and one place better off than at the same stage last season.

Much of their success has come from their continued good form at Goodison Park. Boxing Day's defeat by Sunderland was their only home loss in 2013, with only four defeats in their past 32 home games.

Everton have earned 42 points from the past 51 available at Goodison Park. Their only defeat came on Boxing Day against Sunderland.

Against that backdrop, their confident start was no surprise as they dominated possession early on. Romelu Lukaku dragged a shot wide before the Belgian striker headed inches wide at the far post after Mirallas's deep cross from the left.

Norwich's resolve was finally broken when Barry drove the ball into the top corner from 20 yards, after Lukaku's lay-off, for his third Everton goal since joining on loan from Manchester City.

With the Canaries struggling for goals this season, having scored only 17 times in 20 games, Gary Hooper was partnered with record signing Van Wolfswinkel for the first time.

The Dutchman has scored just once for the club since signing from Sporting Lisbon in the summer for in the region of £8.5m, in the 2-2 draw with Everton on the opening day, and almost brought the visitors level with a curling strike from 20 yards that was clawed out by Tim Howard.

Norwich chances were few and far between though, although Hooper was denied twice by Howard when through, as an impressive passing display from the hosts left Chris Hughton's men hanging on just to stay in the game.

Everton continued to dominate after the break but, as they failed to capitalise on their possession, the visitors' hope grew, with Van Wolfswinkel volleying a rare chance over the bar.

That hope was extinguished soon after as Mirallas curled home his third goal of the season from 20 yards, leaving Norwich, who rallied late on, just two points above the relegation zone.

"It was an entertaining game and important to score that second goal.

"Overall we created a lot of chances, maybe that clinical touch in the final third was missing but I couldn't be happier the clean sheet. Some of the phases of our game were fantastic.

"The way we handled the second half was pleasing. The understanding between the players is clear, we are getting really strong. We need players back from injury and make sure competition for places is as strong."

"They were good. We knew that before we came here. There isn't a side that has come here and had more possession this season.

"What you need to do is stick in there. We had the best chance of the half through Gary Hooper, they score a spectacular goal.

"In the second half I thought we gave a good account of ourselves but we were up against a really good unit."