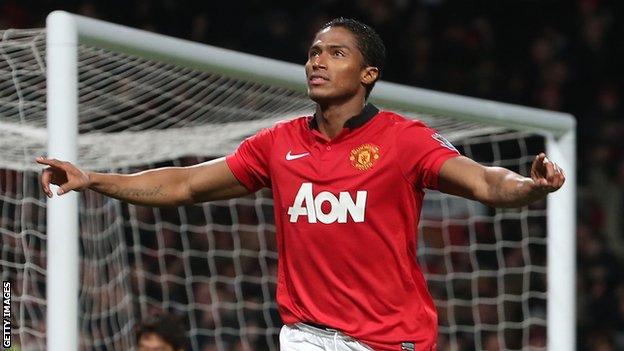 Manchester United's poor run of form was brought to a convincing end as Adnan Januzaj inspired them to victory over Swansea.

The 18-year-old did not start last weekend's FA Cup third-round defeat by the Welsh side but proved his undoubted value by helping to create second-half goals for Antonio Valencia and Danny Welbeck.

His contribution returned David Moyes's side to winning ways as they avoided the ignominy of losing four consecutive games for the first time since 1961.

It also ended a wretched run of four defeats in their past six home games as United finished a forgettable week on a positive note.

Following their defeat by Michael Laudrup's side last Sunday, United lost in the Capital One Cup at Sunderland, with Moyes charged by the Football Association for comments about the referee after that loss.

But this was a much improved performance by the Scot's team, who moved back to within four points of fourth-placed Everton.

Two ends of the spectrum

They are still nine points behind Premier League leaders Chelsea, whom they face a week on Sunday, but with Welbeck and Shinji Kagawa also impressing in the absence of the injured Wayne Rooney and Robin van Persie, there was at least a sense that a Champions League spot is well within their grasp.

The hosts were helped by the performance of Nemanja Vidic, who kept Wilfried Bony, scorer of Swansea's winner last week, quiet.

The Swans were far better in possession than United in that game, and the pattern of the first half was similar this time as the home side created the better chances but were less accomplished on the ball.

Januzaj, rested last weekend, was United's most creative force, playing in the number 10 position behind Welbeck, and delivered several testing set-pieces before cracking a shot against the bar from one.

Vidic, Darren Fletcher and Patrice Evra then all went close and Welbeck should have put the hosts ahead when a smart interchange between Valencia and Rafael led to the Brazilian finding the unmarked England striker, who curled a shot wide of the far post from 10 yards.

Although the visitors caused problems, with Jonjo Shelvey dragging a shot wide, they did not - unlike last week - have an early goal to defend.

Januzaj emerged from the break to feature down the left and the Belgium-born forward immediately teased Angel Rangel before whipping another superb cross in, with Valencia firing in from Kagawa's header back across goal.

Twelve minutes later, Januzaj was at it again, this time on the right. His curling centre was cleared as far as Evra, whose shot was flicked in by Welbeck for his ninth goal of the season and sixth in as many league games.

The wait goes on

Swansea have not beaten United in the League since a 2-0 home victory in January 1982 and have now failed to beat the Red Devils in six previous Premier League matches.

With a two-goal cushion, United's confidence was restored and Chris Smalling missed a golden chance when he somehow volleyed over from five yards following Kagawa's cross.

Kagawa was then wasteful when, after a swift break, he dribbled around goalkeeper Gerhard Tremmel but saw his effort cleared off the line by Leon Britton.

The visitors caused a few nervous moments thereafter but United held firm and will approach their next game against Chelsea, in which Rooney could return, with renewed confidence.

"I think we did well, we controlled the first half knowing that Manchester United would be a bit anxious after three consecutive losses but giving away the goal after just 90 seconds of the second half was just what we didn't want.

"They have very good players and they got on top of the game and when they got the second goal they got real belief.

"We lost the game but now we have to get some players back and win the next game. I think we are down to just 13 fit players now but we will see what happens in the week."