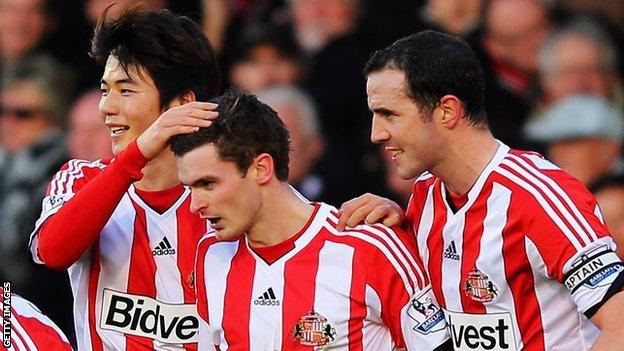 Adam Johnson's hat-trick helped Sunderland thrash Fulham to move off the bottom of the Premier League.

Johnson put the visitors ahead, curling in a 25-yard free-kick, before his low set-piece was steered in by Ki Sung-Yueng from 12 yards for 2-0.

Fulham pulled a goal back when Steve Sidwell headed in Damien Duff's corner.

But Johnson grabbed his second with a low shot, before completing his hat-trick with a penalty after Philippe Senderos fouled Jozy Altidore.

The victory, only Sunderland's second away from home this season, was enough to take them above Crystal Palace into 19th place on goal difference.

Gus Poyet's side are only one point adrift of 17th-placed West Ham while Fulham, who had won two of their past three home games, missed the chance to ease their relegation fears with a disappointing home performance.

Johnson took his chance after being restored to the starting line-up having impressed as a substitute in the Black Cats' 2-1 Capital One Cup victory over Manchester United on Tuesday.

With Arsenal's Theo Walcott ruled out for six months because of a knee injury, right-winger Johnson could yet force his way back into Roy Hodgson's plans for the World Cup in Brazil this summer.

The last of his 12 international appearances came in a 2-1 friendly win over Italy in August 2012, but he proved the difference between the sides at Craven Cottage.

Fulham, who are 16th in the table, will regret early missed chances, with Dimitar Berbatov heading straight at Sunderland goalkeeper Vito Mannone from close range inside the opening seven minutes.

Sunderland became only the 10th club to score 7,000 goals in Football League and Premier League matches.

They had been on 6,998 goals before this game at Craven Cottage, although they still have a long way to go before they catch Manchester United, who have scored 7,618 goals since the first season of the Football League in 1888.

Johnson, who also netted in his side's 3-1 FA Cup win over Carlisle on Sunday, scored direct from a free-kick after was he fouled by Sidwell.

Sunderland, who had only scored five goals in their 10 previous away Premier League matches, doubled their lead 12 minutes later. It came after a clever free-kick routine that saw Johnson play a low pass to the penalty spot, from where Ki shot through a crowded six-yard box.

Sidwell gave Fulham a lifeline within seven minutes of the second half starting, but Sunderland soon restored their two-goal advantage as Ki's intelligent pass found Johnson, who drilled a low effort into the net.

The winger completed his hat-trick late on when he converted a penalty after Senderos's clumsy challenge on Altidore as Sunderland secured only their fourth Premier League win of the season.

"It is a massive blow for us. We know how important it is to win your home games, especially against the teams near you in the table, but it's a massive opportunity missed for us to move up the league.

"We settled really well and had some really good chances. You want your chances to fall to someone like Dimitar Berbatov, but he did not put it away.

"Then we went 1-0 behind and that gave us a mountain to climb. We were playing well enough to get back into it and there was still plenty of time but when it went to 3-1, that was the killer goal.

"We know from experience that the January transfer window is a difficult time, but we need to look at possible targets that are available and hopefully we can get something done."

"Moving off the bottom has been coming for some time and we did it in style. There's not too many games to play so it was a very good performance.

"The fans have been excellent, but we have to give more to the home fans and make sure we do the same thing at home.

"It has been a very difficult six months but it looks like we are getting out of it now."