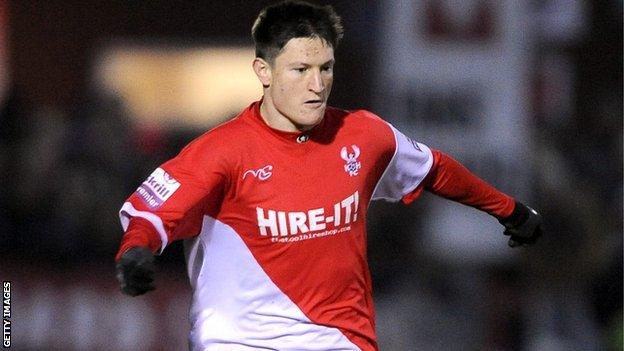 Lolley then hit a 75th minute penalty after being fouled by James Clarke.

He then scored again from the spot when sub Marvin Johnson was felled by Angus MacDonald as Harriers climbed back into the Conference Premier play-off zone.

It was also the Harriers' second successive clean sheet, having previously not enjoyed one since the in early October.

Salisbury had won both their games over Christmas prior to having their last three league games postponed.

Playing their first game in a fortnight, they showed little sign of ring rust, matching Harriers for effort - only to be beaten by the one quality player on the pitch.

Lolley's opener was another stunner, taking his Harriers tally to 10 for the season since his summer arrival from local non-league minnows Littleton, the majority of which have been goal of the season candidates.

And that was a fitting way for Lolley to bow out if, having been this turns out to have been the 21-year-old's final game at Aggborough.

"We wanted to get the bandwagon rolling again and we were pleased to get three points.

"The manner in which we did it pleased me too as it was founded on a good defensive performance.

"But there were things I wasn't pleased with too and I know we have a lot of work to do.

"Joe Lolley was excellent. He's a fantastic young talent. But what he did today was built on the back of a great team ethic. And, for us to progress, it has to be as a team."

"I thought the game was a lot tighter than the scoreline suggests.

"At 1-0 I made a couple of substitutions that made us more attacking, we'd stretched the pitch and we were looking like we might get back in the game.

"But the second goal killed us. And the two lads who gave away the penalties know they've cost us the game.

"The first goal was bit of brilliance from Joe Lolley. Kidderminster will struggle to keep him in the form he's in right now."