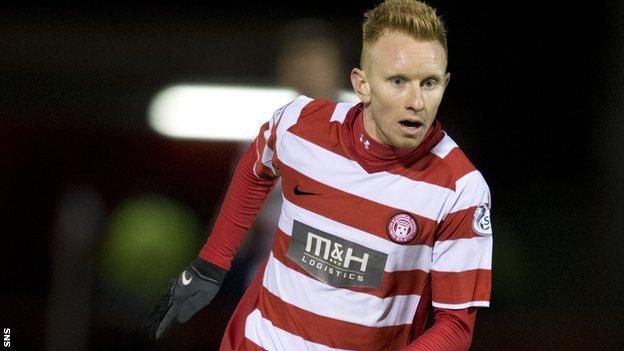 This attractive-looking match between two promotion-chasing sides turned out to be a drab affair.

But Falkirk extend their unbeaten league run to eight games and they both move a point closer to leaders Dundee.

The visitors came closest to scoring, with Ali Crawford having a goal-bound shot cleared off the line by the highly impressive Will Vaulks.

On the evidence of this game neither team looked like title contenders.

These clubs have a reputation for encouraging young talent and allowing them to flourish in teams that try to play passing football.

Those elements were all present here, but the efforts of both teams to play in this manner only occasionally led to goalscoring opportunities.

Anthony Andreu stung the palms of Michael McGovern in the Falkirk goal early on, while Mark Millar had Kevin Cuthbert scrambling for a free kick that curled just wide of the Accies keeper's right-hand post.

Falkirk were almost rewarded for splendid work firstly by Phil Roberts and then Craig Sibbald, but the latter's cross took a slight deflection denying Conor McGrandles a header into an empty net.

But the home side had a narrow escape shortly before the break as Crawford's shot beat McGovern only for Vaulks to get back brilliantly to clear off the line.

If Falkirk were grateful for that let-off, they breathed another sigh of relief just after the break when Stephen Hendrie's cross presented Antoine-Curier with a gilt-edged opportunity, but with a free header inside the six-yard box, he somehow sent the ball wide.

If anything there was an even greater dearth of end product in the second half, but Jay Fulton tried to put that right, only for his glancing header to land on the roof of the Accies net.

Substitute Blair Alston did likewise in the closing minutes as the game petered out.

Shots on Target
Home0
Away1