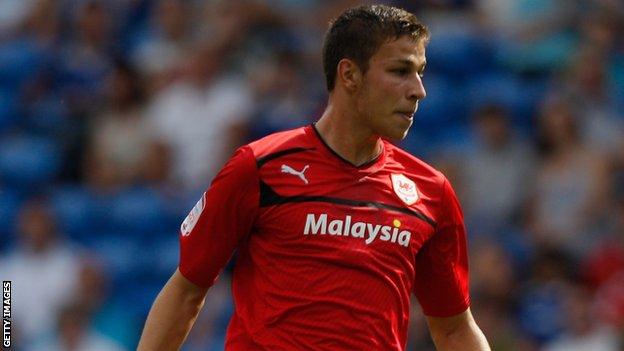 Cardiff City midfielder Filip Kiss will spend the rest of the season on loan at Ross County.

The 23-year-old Slovakian watched the Staggies beat St Johnstone 1-0 at the weekend and goes into the squad for Saturday's visit to Partick Thistle.

Kiss moved to Wales from Slovan Bratislava in 2009 and has made 28 appearances for the Bluebirds.

However, he only played in three games last season and has not featured at all during this campaign.

The Dingwall club have already brought in as well as since the January transfer window opened.

And chairman Roy MacGregor has hinted at more arrivals.

"We recognised that we haven't been good enough and we need to do something about it," MacGregor told BBC Scotland on Saturday.

County occupy third-bottom place in the Scottish Premiership and, although they hold a 19-point advantage over bottom side Hearts, the Highlanders are eager to move up to the table to avoid finishing 11th and entering a promotion-relegation play-off at the end of the season.

County clinched a top-six finish in their debut top-flight campaign last term, with their form in the second half of the season proving crucial to their eventual placing of fifth.

"We strived for 19 years to get here and we're not going to give it up easy," added MacGregor.

"Everybody said it was going to be difficult. It's the second season and we're not unknown and we had a lot of spirit coming up from winning the First Division.

"We just got a reaction and it wasn't the right reaction.

"It's like anything in life, when you make mistakes you've got to challenge mistakes and do something about it and that's exactly what we're doing now."