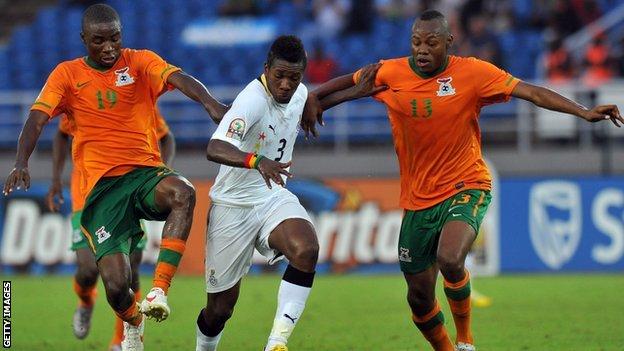 The duo are reunited with their former Zambia coach Herve Renard at Sochaux.

Centre-back Sunzu, 24, has agreed a three-and-a-half-year contract while 22-year-old midfielder Sinkala is on a six-month loan with an option to buy.

The players won the 2012 Africa Cup of Nations under Renard, who left Zambia in October to become Sochaux coach.

Sunzu had been linked with a move to the English Premier League, with a deal with Reading collapsing after a contractual dispute arose between his handlers and TP Mazembe.

And the defender revealed to BBC Sport: "Sochaux is not my dream move, but since there is (Herve) Renard, it's a good move. It is a stepping stone for me to go to play in the English league; it is difficult to just go straight to England from Africa.

"It is not easy for a coach to get players from Africa; Renard has confidence in me and he believes in me. It will be easy for me to adapt and play because Renard knows me well, he has mentored me."

Sunzu, who had an unsuccessful stay at French Ligue 2 side Chateauroux in 2008, added: "I want to be at Sochaux for three years, so I can adapt. Then I can later go to England."

Sunzu and Sinkala will reunite with another Chipolopolo player, Emmanuel Mayuka, who is on season loan from English side Southampton.