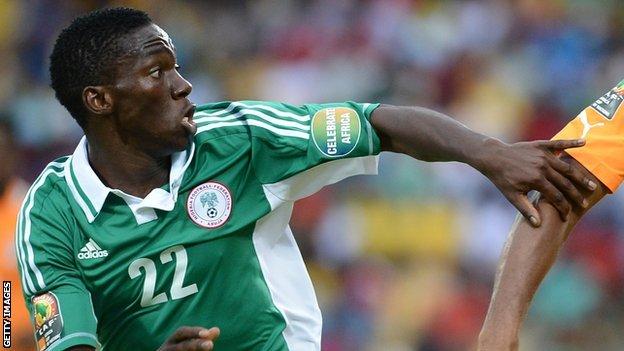 Championship Middlesbrough have signed Nigeria centre-back Kenneth Omeruo on loan from Chelsea until the end of May.

"With the World Cup in June, it is important to have the chance of playing regularly," Omeruo told BBC Sport.

"Hopefully I can help Middlesbrough fight for promotion - nothing is impossible in football."

After signing for the Blues from Standard Liege in January 2012, Omeruo was immediately sent on loan to Den Haag.

He is yet to make his Chelsea debut, and with his sights firmly set on the World Cup in Brazil, Chelsea manager Jose Mourinho has allowed him to move to the Riverside.

Omeruo will be working under Boro's Spanish boss Aitor Karanka,

"Training with the first-team at Chelsea is just not good enough for my progress and development," Omeruo explained.

"More significantly, I was highly recommended [to Karanka] by Jose Mourinho and that feels good.

"They [Karanka and Mourinho] speak to each other on a daily basis so I believe I'll be in good hands.

"Apart from playing regularly and helping the team, this provides me with an opportunity to be sharp for the World Cup."