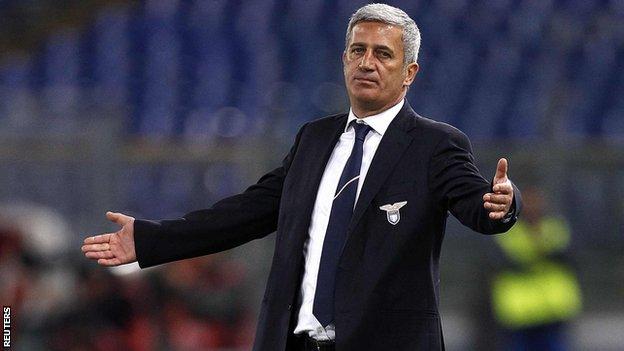 Petkovic announced last month that he is taking over the Switzerland team after this year's World Cup in Brazil, when his Lazio deal ends.

The Serie A side had insisted the 50-year-old was in breach of contract when he agreed to take that job.

Petkovic succeeded Reja, 68, in the summer of 2012 after he had resigned.

Reja originally took over the then relegation-threatened Biancocelesti in February 2010, helping them to mid-table safety in his first season before finishing fifth in 2010-11.

Despite the protestations of president Claudio Lotito, he quit Lazio after securing a fourth-place finish in his third season in charge.

The announcement ends a tumultuous spell for the Rome-based club, in which Reja had been reported to be taking training despite Petkovic still being employed by them.

Prior to the latest developments, a statement released by Petkovic's lawyer, Paco D'Onofrio, had asked for "a fair and direct meeting with president Lotito in order to clarify the absurd misunderstanding which has arisen".

Sarajevo-born Petkovic, who has spent much of his playing and coaching career in Switzerland, led Lazio to the Italian Cup last season, beating capital rivals Roma in the final. They finished seventh in the league.

This season they are 10th and have reached the knockout stages of the Europa League.

Former England midfielder Paul Gascoigne had an injury-affected three-year spell at Lazio from 1992 to 1995.

They next face Inter Milan at Stadio Olimpico on Monday, which is their first league fixture following the end of the winter break.