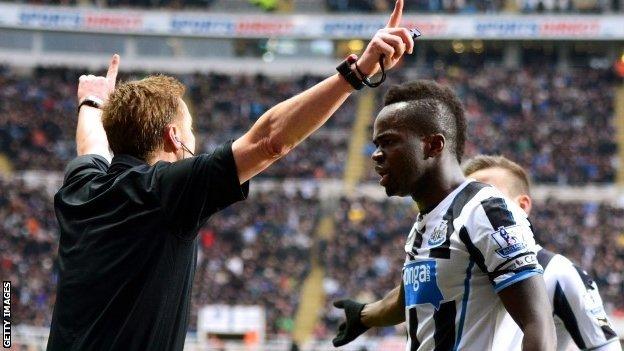 Manchester City moved to the top of the Premier League as they overcame a Newcastle side for whom Cheick Tiote had a goal controversially disallowed.

Edin Dzeko slid in to give City an early lead and control of the contest.

But Tiote's long-range blast, ruled out after an offside Yoan Gouffran was judged to have interfered with play, sparked the hosts into life.

Law 11 in the Fifa rulebook

Victory for Arsenal at Aston Villa on Monday would ensure Manchester City's stay at the top of the table is short-lived.

Nonetheless, the win at St James' Park takes City's season's tally to 94 goals - one more than in the entire 2012-13 campaign - and improves their previously suspect away form to four victories in their last five league games on the road.

City will rightly have complaints about a crude second-half tackle by Yanga-Mbiwa that resulted in Nasri being taken off on a stretcher and only a yellow card awarded to the Newcastle man, but the Magpies are likely to be just as aggrieved by referee Mike Jones's performance.

His decision to rule out what initially seemed a legitimate leveller from Tiote just after the half-hour mark left Newcastle manager Alan Pardew incensed and bewildered on the sidelines.

His side, fuelled by a sense of injustice, responded with a spirited performance but they ultimately lacked the quality up front to right what they saw as a wrong.

City have no such shortcomings and the intelligence and speed of their attacking movement had already pulled apart Newcastle as the impressive Aleksandar Kolarov surged beyond Gouffran to supply a low cross for Dzeko to steer into the roof of the net in the eighth minute.

Newcastle's pretty passing patterns had mostly been restricted to the middle of the pitch by the industrious visitors, before Jones's decision to rule out Tiote's strike.

Retreating after his side's corner was cleared, Gouffran dodged his team-mate's shot which continued on past a rooted Joe Hart into the City goal.

Gouffran was certainly offside, but after protests from Manuel Pellegrini's side and discussions with the assistant referee, Jones ruled that he was also interfering with play.

The incident added volume to the atmosphere at St James' Park and venom to Newcastle's tackling.

Cabaye and Moussa Sissoko were both booked for dissent, with Fernandinho and Pablo Zabaleta also having their names taken before the half-time whistle was drowned in jeers.

Pardew and Pellegrini exchanged angry words as they went off at the break, while the Newcastle manager also sought out the referee.

The game swung in the balance after play resumed with Cabaye threatening from distance for the hosts, and Negredo and Nasri almost applying finishing touches to more intricate City attacks.

Loic Remy, who has now scored in just one of his last 10 appearance, wasted the hosts' best chance, firing straight into Hart's legs as the City defence were caught under a long ball.

The five-minute break in play caused by Yanga-Mbiwa's swipe at Nasri's knees came to an end when the France international was carried off close to tears.

Although stretched at times, City finished the stronger and, after Fernandinho had hit the bar with a header and Steven Taylor cleared off the line, Negredo scampered clear to ease their nerves, rolling in after a fortunate ricochet off Tim Krul in the final moments.

A gallery of the day's Premier League action is available on the BBC Sport Facebook page.