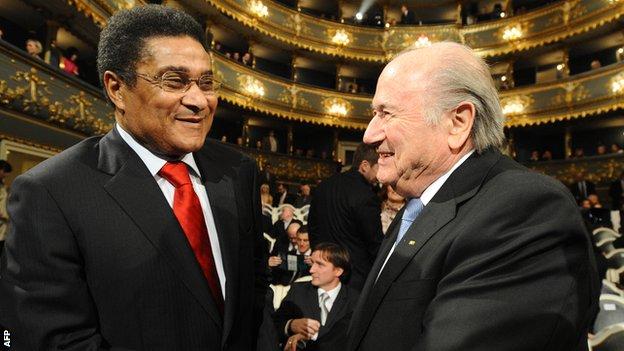 Leading football figures have paid tribute to Portugal legend Eusebio, who has died at the age of 71.

The former Benfica striker scored 733 times in 745 professional games and was top goalscorer at the 1966 World Cup.

Chelsea's Portuguese manager Jose Mourinho said of Eusebio: "I think he is immortal."

Manchester United and England great Sir Bobby Charlton said Eusebio was "one of the finest players I ever had the privilege to play against".

Fifa president Sepp Blatter tweeted: "Eusebio's place among the greats will never be taken away."

In a statement, Benfica said: "We will remember his talent, his example, his character which marked Portuguese football and which established him as a global benchmark for football.

"Eusebio's life is the heritage of all those who love football.

"Benfica was his home port. He made Benfica more than a club, he made it his home and his family. The memory and legacy of Eusebio will remain among us."

Portugal captain Cristiano Ronaldo said his countryman was "always eternal" while Luis Figo, who won a record 127 caps for Portugal, described him as "the greatest".

Mozambique-born Eusebio won the European Cup with Benfica in 1962, and went on to score nine goals as his side reached the semi-finals of the 1966 World Cup, where they were beaten by eventual winners England.

Former Germany captain and coach Franz Beckenbauer, who also starred at the 1966 World Cup, wrote on Twitter: "One of the greatest football players ever has passed away. My thoughts are with his family."

Eusebio was part of the Benfica team beaten 4-1 in extra time by Manchester United in the 1968 European Cup final.

Early career: Started with Sporting Lourenco-Marques, a nursery club of Sporting Lisbon, but was signed by Benfica for £7,500 at the age of 19.

Benfica: Helped side beat Real Madrid 5-3 in the European Cup final in 1962. Won 10 league championships and five cups in his 15 years at Benfica.

Starring roles: Named European Footballer of the Year in 1965 and top scorer at the 1966 World Cup with nine goals.

Charlton was United's captain that day and also faced Eusebio in the semi-finals of the 1966 World Cup, when England defeated Portugal at Wembley.

"I met him on numerous occasions after our playing careers had finished and he always represented both his club and his country in exemplary fashion," said Charlton.

"I feel proud to have been both an opponent and friend and am saddened to hear of his passing."

Alex Stepney, then United's goalkeeper, made a crucial save from Eusebio towards the end of normal time in the 1968 European Cup final, which the striker applauded.

"The fact he was standing there clapping before running away is a mark of the man," Stepney said.

"The fact he lost that semi-final in 1966 and also the final against us two years later creates a false picture. In a generation of truly great players, he was one of the very best."

Eusebio was famed for his powerful shooting and blistering acceleration, traits which made him the Portuguese top flight's leading scorer seven times during a 15-year, trophy-laden spell with Benfica.

Former England striker and Match of the Day presenter Gary Lineker wrote: "Sad news that Eusebio has died. One of the greats of his generation. Could play and strike a ball like very few others."

Former Arsenal and Scotland midfielder George Graham added on BBC Sportsweek: "He was one of the great players, especially playing for Portugal in the World Cup in England - he was phenomenal in that World Cup. It's very sad to see one of the greats die."

Former Netherlands player Ruud Gullit said: "A great footballer left us and I want to say thanks to Eusebio for all his greatness and beautiful football moments he gave us."

Former England international Jimmy Armfield told BBC Sport: "There were some African players in France, Portugal and Spain at the time but he was the first African footballer to be a true great.

"The football world mourns him. He was a good player and a good chap."