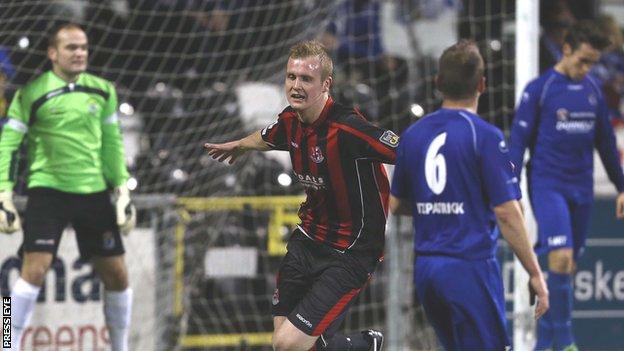 Crusaders have moved up to second in the Premiership after easing to a 5-1 victory over Dungannon at Seaview.

Jordan Owens headed the hosts ahead before Paul Heatley dinked over keeper Gareth Buchanan to make it 2-0.

Owens tapped in to complete his double on 53 minutes and Jamie Tomelty pulled one back with a deflected shot before Gary McCutcheon slotted home.

Adam McMinn headed into his own goal as Crusaders sealed a win which takes them six points behind leaders Linfield.

Crusaders dominated from the start in blustery conditions, and McCutcheon had an early shot saved before Owens made the breakthrough after nine minutes.

The unmarked striker headed in from close range from Chris Morrow's corner for his 15th goal of the season.

Heatley was a constant threat from the left and he added a classy second goal in the 31st minute.

Eamon McAllister's pass sent the winger clear and a simple chip over a diving Buchanan took the ball into the net.

The Crues needed a bit of luck to make it 3-0 - Craig McClean's cross struck the inside of a post and the ball bounced off a prostrate Buchanan and across the goal-line, leaving Owens with the easiest of tap-ins.

Tomelty, a second-half substitute, gave the visitors hope of a comeback when his 20-yard strike on 68 minutes took a decisive deflection which left keeper Sean O'Neill stranded.

McCutcheon restored the three-goal advantage seven minutes later, the striker pouncing on a weak McMinn backpass and rounding Buchanan before sliding in.

Owens should have completed his hat-trick after latching on to a pinpoint pass from from Andy Smith, who came on for his Crusaders debut, but fired wide with just Buchanan to beat.

McMinn had a night to forget after he could only head into the Swifts net from Morrow's powerful drive across the goalmouth nine minutes from time.

Stephen Baxter's side take over second spot from Cliftonville on goal difference although they have played a game more than the Reds and pacesetters Linfield.

Dungannon rarely threatened in a disappointing display and the County Tyrone side remain eighth.