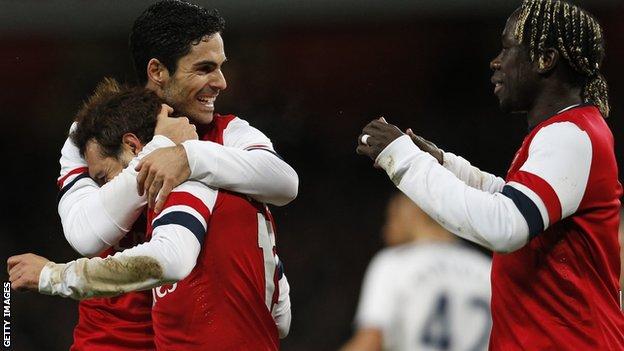 Arsenal's reward for beating London rivals Tottenham on Saturday is a home tie against League One Coventry City in the fourth round of the FA Cup.

The Gunners, who were knocked out by Blackburn in the fifth round in 2013, last lifted the trophy in 2005.

Chelsea will host Stoke, while Manchester City will play Watford if they defeat Blackburn in their third-round replay.

Swansea's reward for beating Manchester United at Old Trafford is a trip to Championship side Birmingham City.

Holders Wigan will entertain Crystal Palace after beating MK Dons in their replay after the two sides drew 3-3 in their first meeting.

Roberto Martinez's Everton head to League One Stevenage, while Ole Gunnar Solskjaer's Cardiff will travel to Championship side Bolton Wanderers.

Liverpool, who defeated League One Oldham 2-0 in their third-round fixture, will travel to Championship side Bournemouth.

"One of my ambitions when I arrived at Southend United was to fill the stadium and I think we can do that against Hull."

Kidderminster are the only non-league side left in the competition after beating League One promotion hopefuls Peterborough in their third-round replay. They will travel to Premier League strugglers Sunderland in the fourth round.