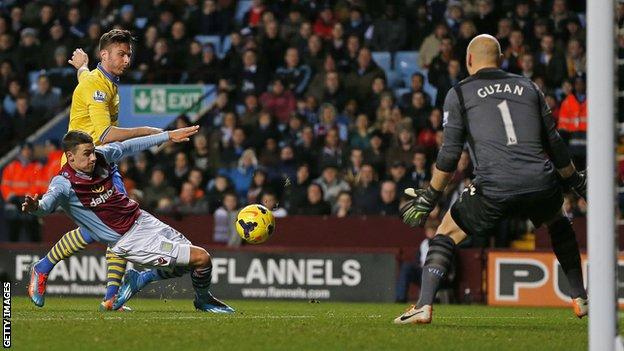 Arsenal leapfrogged Manchester City and Chelsea to return to the top of the Premier League with victory at Aston Villa.

It was a win that was, for the most part, comfortable in the extreme as goals from Jack Wilshere and Olivier Giroud inside a minute in the first half gave Arsene Wenger's team the lead their superiority fully deserved.

Villa had spent much of the game chasing shadows and being outclassed but finally managed to give the visitors some anxious moments when Christian Benteke scored his first goal since 14 September with a diving header 14 minutes from time.

The Gunners held on for what was a vital, and deserved, win as they extended an unbeaten record at Villa Park to 15 matches stretching back to December 1998.

And there was further good news, especially with Theo Walcott ruled out for the rest of the season, as Alex Oxlade-Chamberlain returned for the first time since the opening day as a late substitute after recovering from a knee problem.

Oxlade-Chamberlain came on for another substitute, Tomas Rosicky, who suffered a nose injury in a challenge with Gabriel Agbonlahor.

If Wenger had any complaints on a night when the Gunners went a point clear at the top of the table, it will be that they did not turn their dominance into more goals and somehow allowed Villa the chance of an unlikely point in an uncomfortable spell near the end.

The hosts, meanwhile, only came to life when it was too late and manager Paul Lambert must somehow find a way of injecting confidence into a side desperately needing the menacing figure of Benteke to regain last season's form.

It was all a far cry from the opening day of season when Villa left The Emirates full of optimism after beating Arsenal 3-1.

There could not have been a sharper contrast in form between the two sides. Arsenal had won a north London derby FA Cup third round tie against Spurs while Villa had suffered the embarrassment of a home defeat by League One strugglers Sheffield United.

And how it showed in the early phases as Arsenal tormented Villa in possession, Giroud coming closest with a glancing header from one of several testing crosses from Bacary Sagna.

Lambert was forced into a reshuffle when defender Nathan Baker was struck full in the face by Serge Gnabry's powerful shot. He was treated for around eight minutes before being taken off on a stretcher. It looked a real concern but Villa were relieved to report he had only suffered mild concussion.

Leandro Bacuna came on and for a very brief spell Villa actually caused Arsenal concern, Karim El Ahmadi wasting their best chance when he sent a sidefoot finish over the top from 12 yards.

The only irritation for Wenger was whether Arsenal would provide the final flourish to all their fine approach play - and that was banished with two superbly constructed goals within the space of seconds.

Wilshere made the breakthrough after 34 minutes, sliding home from inside the area but so much credit must go to that graceful creator Mesut Ozil, whose pass in behind Matt Lowton enabled Nacho Monreal to set up the England midfielder.

And the game had barely restarted when Giroud added a fine second, Wilshere making the goal with a pass that let the striker score emphatically past Villa keeper Brad Guzan.

Christian Benteke had not scored for 11 Premier League matches. It was 14 hours and 45 minutes since his last goal, against Newcastle in September

Benteke had cut a frustrated figure but he demonstrated his threat with an athletic volley that was narrowly off target before giving Villa hope with a stooping far-post header from Lowton's brilliant cross.

It gave a very subdued Villa Park brief hope that they might rescue a point but Arsenal held on for another important away win.

"Nathan Baker was concussed. He took a blow to the side of his head. That was dangerous and it rocked us a bit - we had worked all week on the system - but thankfully he's a lot better. He throws himself into things, that's what he does.

"In the second half we were excellent, we looked great and a real threat. We were lifted by the goal. It's not easy playing Arsenal - they are title contenders but everybody can see we gave them a game.

"You have to give us credit. We came into it but we might have snuck a draw."