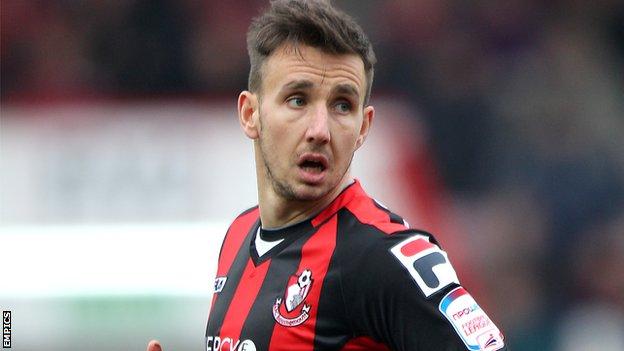 The 29-year-old scored 58 goals in 78 appearances for Crawley during an 18-month spell with the Reds before joining Bournemouth in January 2012.

"It's great to be back at a club where I have such great memories," Tubbs told the club website.

"It's a big challenge for me because in a way I have to prove myself all over again but I can't wait to get started."

He added: "I'm really looking forward to working with [manager] John Gregory and getting some goals for the club and the fans, who were brilliant to me when I was here before."

Former England C international Tubbs joined Crawley from Salisbury in the summer of 2010 for a fee of £70,000.

He scored 40 goals in 47 games in his first season with the West Sussex club, helping them win the Conference Premier title. He scored 13 league goals the following season before joining Bournemouth, then in League One, in the January transfer window.

The Cherries paid a then-club record fee of around £800,000 for Tubbs but the majority of his appearances for the Dorset side have come as a substitute.

He spent the first half of this season on loan at Rotherham, where he scored one goal in 21 games.

"I know all about Matt's goalscoring record here and how much the fans loved him," Gregory said.

"He really wants to do well again for the club. He loved his time at Crawley and that was a big factor in his decision to come back.

"He is a very cool customer in the penalty area, a great natural finisher."