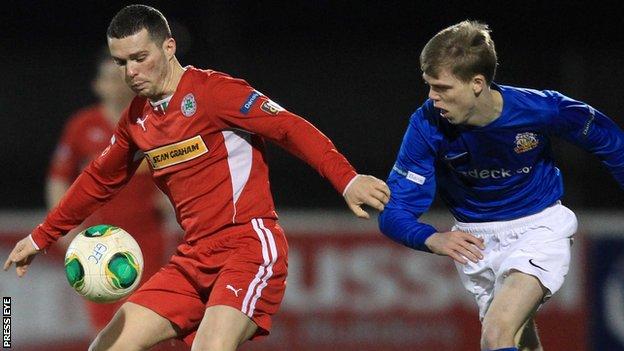 Premiership champions Cliftonville moved to within three points of leaders Linfield after a 5-2 win over Glenavon.

Two early strikes from Joe Gormley put the Reds in control but Glenavon hit back with Andy McGrory firing home.

Ciaran Martyn levelled with a cool chip on 59 minutes before Martin Murray slotted in to make it 3-2.

The visitors made a storming start in the Mourneview Park clash with Gormley netting twice in the opening 10 minutes.

The prolific striker hit the net after eighth minutes, firing past keeper Andy Coleman after being put through by Barry Johnston.

Gormley quickly registered his 27th goal of the season, unmarked from a Liam Boyce flick-on and finishing with ease.

McGrory started the Lurgan Blues comeback, showing composure by hitting low and hard into the net after 30 minutes.

Coleman denied Gormley a treble when he raced out to saved at the forward's feet as he went clear on goal.

Martyn finished an excellent Glenavon move for the the equaliser, with a dink over advancing keeper Conor Devlin.

Coleman was again in action with a double-save to keep out shots from Gormley and Boyce.

However, the Reds regained the lead on 67 minutes with Gormley setting up Murray, who beat Coleman to the ball to slot in.

Catney netted from a Boyce cross in the 85th minute and substitute Doherty, a former Glenavon midfielder, completed the scoring in style with an 18-yard volley a minute from time.

Cliftonville are now unbeaten in 13 games while mid-table Glenavon failed to build on their Boxing Day win over mid-Ulster rivals Portadown.