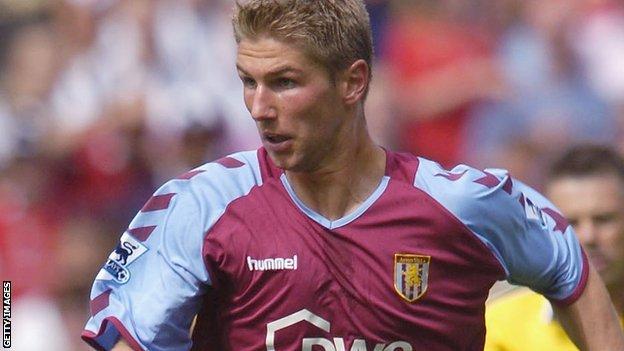 The 31-year-old, who won 52 caps for Germany and also played for West Ham and Everton, made the announcement in newspaper Die Zeit.

He is the most prominent footballer to publicly reveal his homosexuality and said it was "a good time" to do so.

"I'm coming out about my homosexuality because I want to move the discussion about homosexuality among professional sportspeople forwards," he added.

Thomas Hitzlsperger speaks to BBC Radio 4's Today programme about his decision to come out, from 06:00 GMT on Thursday 9 January

The midfielder, who retired from the sport in September after a series of injury problems, said he has only realised "in the past few years" that he would "prefer to live together with another man", adding: "I've never been ashamed of the way I am."

However, he said the issue is taboo inside the dressing room and it had not always been easy to live with some of the comments dished out on the subject.

"Just picture 20 men sat around a table together drinking - you've just got to let the majority be, just as long as the jokes are halfway funny and the talk about homosexuality doesn't get too insulting," he said.

High-profile athletes from other sports have openly discussed their sexuality in recent years, with Olympic diver Tom Daley revealing in December he was in a relationship with a man.

But examples in football are few and far between. In 1990, former England Under-21 international Justin Fashanu was the first professional footballer in Britain to reveal he was gay. He took his own life eight years later, aged 37.

In February 2013, former United States and Leeds United winger Robbie Rogers said he was gay while Swedish footballer Anton Hysen, son of former Liverpool player Glenn Hysen, announced his homosexuality in an interview with a Swedish football magazine in 2011.

"It's really going the right way now and it's a good change, for me coming out has been 99% positive and I don't regret anything about my decision," Hysen, who plays in the Swedish third division, told BBC Radio 5 Live.

"I've had a few things in games where people would say things, players, fans, or anonymous messages on the internet. When that is around, that is why we have to work for a better future. It shouldn't even be an issue that is needed to be discussed in 2014."

Retired basketball star John Amaechi, 43, the first NBA player to come out as gay, doubts other footballers will follow Hitzlsperger, telling BBC Sport "football is toxic" and its culture must change.

"Footballers coming out at the highest level will happen only as the product of a cultural change within the game. It will not be the precursor to cultural change in football," he said.

"If you want to see people being who they are, coming out and playing at their very best because they're able to be who they are, then the culture of football must change first."

Hitzlsperger joined Villa as a teenager in 2000 from Bayern Munich and went on to play for Stuttgart, Lazio, West Ham and Wolfsburg, with a short stint at Everton before the end of his career.

Brave and right decision. Respect, Thomas Hitzlsperger. His outing is a important sign in our time.

Thomas Hitzlsperger has shown a lot of courage today. Sad times when people have to wait till they retire from their chosen profession before they feel other people will judge them solely on who the human being is. Shame on all of us as a society.

Congratulations to Thomas Hitzelsperger - welcome to the club!

It was during his five-year spell at Aston Villa that the Munich-born midfielder made his name and while at Villa Park he earned the nickname 'Der Hammer' because of his powerful left-foot shot.

The club wrote on Twitter: "Everyone who knows Thomas from his time here at Villa has great respect for him, not only as the fine player he was but also as a man.

"His statement today is a straightforward statement and, along with our support as a club, we hope that everyone involved in the game extend to him their support as well."

He represented Germany at the 2006 World Cup - though he only played 11 minutes of that competition - and the 2008 European Championship, where he started in the quarter-final, semi-final and final.

Germany international team-mate and Arsenal striker Lukas Podolski, Gary Lineker and Joey Barton are among those to have tweeted their support for Hitzlsperger.

Podolski said: "Brave and right decision. Respect, Thomas Hitzlsperger. His outing is a important sign in our time."

Campaign group Stonewall welcomed the announcement. Director of campaigns Sam Dick told BBC Sport: "It's fantastic that he has been brave enough to openly discuss his sexual orientation.

"Every sports star who is willing to speak out makes it just that little bit easier for gay players and fans, and we hope, a new generation of footballers will feel confident enough to be themselves."

The Gay Football Supporters' Network said: "It shows that we are moving one step closer to creating that atmosphere in football where players at all levels would be able to come out should they want to, safely and free from discrimination.

"We hope that one day current players would feel able to come out and that eventually a player's sexual orientation not be a news story, but for now we wish Thomas Hitzlsperger well."