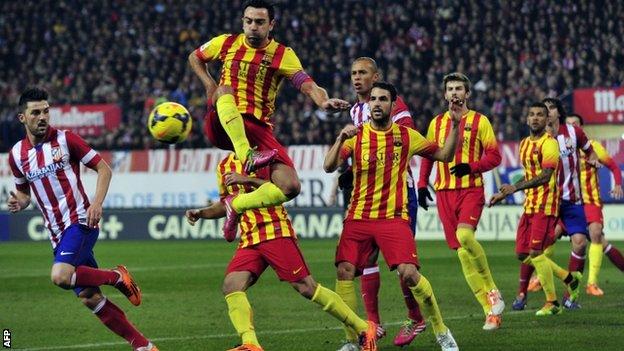 Atletico Madrid and Barcelona remain level on points at the top of La Liga after a tense goalless draw at the Vicente Calderon.

Barcelona substitute Lionel Messi headed wide in the second half before having an angled shot saved.

The Catalan side top the table on goal difference, with Real Madrid six points behind in third.

Real know a win at Espanyol on Sunday would move them to within three points of their two greatest rivals.

Defending champions Barca went into the game top of La Liga on goal difference, ahead of second-placed Atletico after 18 games.

The Catalans had won their last seven matches in all competitions, scoring 28 goals in the process, and have lost just one game all season.

Diego Simeone's side, also with one defeat, had a 100% winning record from their nine home La Liga matches this season and also beat cross-city rivals Real at the Bernabeu in September.

Barcelona boss Tata Martino left Messi, who had just returned from injury, and Neymar on the bench as his side looked to take control of the title race.

It was almost the perfect start for the hosts though as Turkey winger Arda went past Barca left-back Jordi Alba before sending a teasing cross across goal, which Barca defender Gerard Pique headed over the bar.

While the visitors were enjoying a lot of the possession with the hosts defending deep, it was Atletico looking the more dangerous as they broke with pace and intent at every opportunity.

And Costa was inches away from giving the hosts the lead as he touched the ball wide at the far post after centre-back Miranda flicked the ball on.

Pedro headed Andres Iniesta's cross over the bar midway through the half as the defending champions slowly began to get a grip of the game.

Four-time World Player of the Year Messi, fit again after a hamstring injury, was introduced to the action at half-time, but Barcelona continued to struggle to break down the hosts.

Neither side were able to create too many clear-cut chances but Messi should have done better when he headed wide from 10 yards. The Argentina forward then saw a shot well saved by Thibaut Courtois.

Atletico, beaten home and away by Barca in the league in each of the previous three seasons, finished strongly but found the visitors' rearguard too tough to break down as they saw the end of their winning home record.