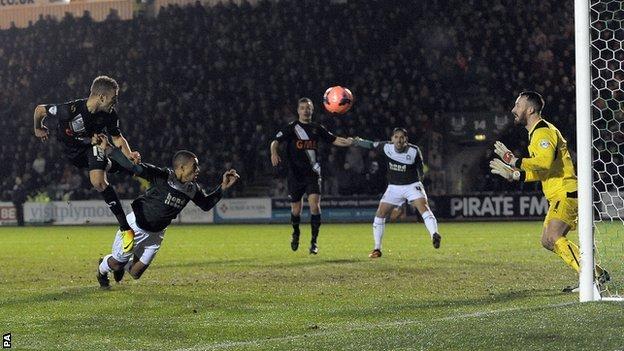 Port Vale twice came from behind to earn a place in the FA Cup fourth round at the expense of League Two Plymouth.

The Pilgrims took an early lead through Andres Gurrieri's header, before Vale's Jordan Hugill fired in from 18 yards.

Reid - Argyle's top scorer this season with 13 goals to his name - saw his 80th-minute spot-kick brilliantly kept out by Vale keeper Neal after Lines had fouled Hourihane inside the box.

In the first meeting, Plymouth came back from 2-0 down to earn a replay. But this time it was Vale who showed admirable character after Argyle had made a flying start.

Gurrieri headed his side ahead after just 90 seconds at Home Park following an error by Neal.

Vale responded well through Hugill's well-struck drive from the edge of the box after a one-two with Louis Dodds.

Argyle captain Hourihane then showed real drive from midfield to run from the halfway line before smashing a 25-yard shot on the run into the bottom corner for an excellent goal.

Once again, however, the visitors found a way back, substitute Williamson heading home a Myrie-Williams' cross in the 63rd minute shortly after coming on.

With 15 minutes to go, Myrie-Williams smashed home Tom Pope's pass to earn a fourth-round home tie against Championship side Brighton.

"We don't do anything easy. That's what the FA Cup is all about.

"We made too many simple errors in the first half. The gaffer's gone in and spoken to the players constructively at half-time and the second half speaks for itself.

"It was a bit like Plymouth in the first game. 2-0 down, nothing to lose, let's have a go at them and, for the first 25 minutes of the second half, they couldn't get the ball off us.

"We made it difficult for ourselves. We had a horror show in the first minute. Chris Neal's made a ricket and he'd be disappointed with the second goal too, which has gone across him. But he's made a world-class penalty save to get himself out of the mess."