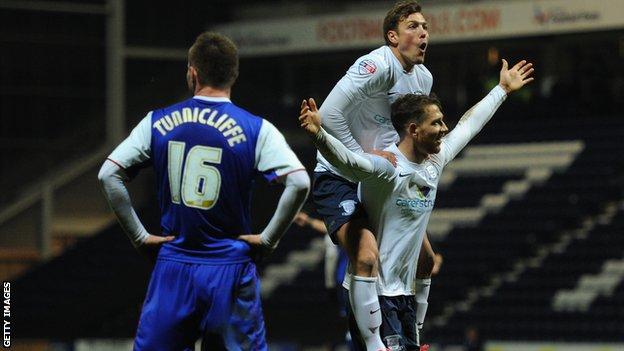 Substitute Joe Garner scored a hat-trick to knock Ipswich Town out of the FA Cup and book League One Preston a fourth-round trip to Nottingham Forest.

Frank Nouble gave the Championship visitors the lead after an error before 25-year-old former Forest striker Garner levelled with a header.

Garner made it 2-1 when he rifled past Scott Loach only for David McGoldrick to equalise with a close-range header.

But Garner sealed a dramatic win for North End following a mistake.

The ex-Watford forward now has 12 goals in 22 appearances in all competitions for North End this season, his treble earning North End a place in the last 32 for the first time since 2010.

A drab tie burst into life when Nouble pounced on a 58th minute mix-up between goalkeeper Declan Rudd and defender Keith Keane to put the visitors ahead.

Garner was introduced four minutes later and he did not take long to make an impact, the former Blackburn youth player heading Paul Gallagher's corner through a crowd of bodies in the 68th minute.

Less than a minute later, after good work down the right from Chris Humphrey, Garner controlled Kevin Davies' knock-down and cracked a low shot beyond Loach.

Extra-time looked to be on the cards at Deepdale when Ipswich substitute McGoldrick made it 2-2 from a Carlos Edwards cross in the 76th minute.

But Garner sealed a dramatic win after seizing on some slack defending in the box to turn and fire Preston through to the next round.

"Bringing Joe Garner on as your leading scorer isn't a gamble.

"He's got great movement, he's a brave lad, he'll get on the end of things and he's two-footed. He's playing with a lot of confidence and we want that to continue for a long time.

"It was a typical cup tie, especially in the second half, the first half there wasn't too much in it."

"We've let them off the hook and conceded three very poor goals.

"I don't see any kids or inexperience in that team, it's a good team I've put out.

"It's not too often I've been this way. I try to be consistent in what I'm like, but I was annoyed with that."