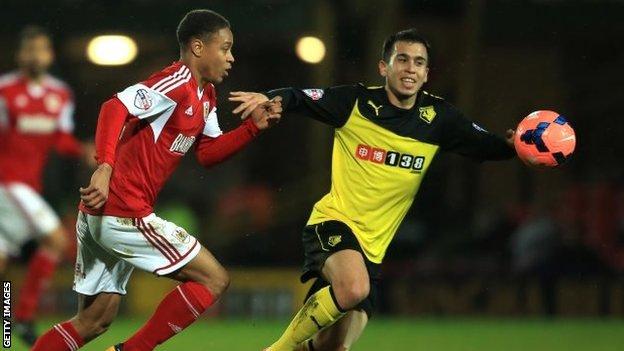 Watford face a trip to Manchester City or Blackburn in the fourth round of the FA Cup after beating Bristol City in a replay.

Goals from Marco Davide Faraoni and Lewis McGugan set up a tie against the winners of Wednesday night's third-round replay at Etihad Stadium.

City had a great chance early on but Sam Baldock could not beat Jonathan Bond in the Watford goal.

Faraoni then scrambled in to open the scoring before McGugan drove home.

Fernando Forestieri wasted two good chances for Watford in the closing stages but they held on to beat the League One side.

Hornets forward Troy Deeney went close to breaking the deadlock in the 24th minute but his near-post header from McGugan's corner flashed across goal and away to safety.

Another McGugan centre found Faraoni at the back post five minutes later and the full-back fired the home side into the lead via a deflection off City defender Karleigh Osborne.

The visitors threatened to equalise with Bobby Reid shooting over from close range on the stroke of half-time and Marlon Pack forcing a good save out of Bond shortly after the restart.

But the game was effectively put to bed in the 64th minute when a tackle on Deeney fell nicely into the path of McGugan who drilled the ball into the bottom left-hand corner.

Watford could have extended their lead further with Deeney, McGugan and Forestieri all spurning opportunities in the final quarter of the game.

Hornets boss Beppe Sannino said: "What was important for me was to get through in the cup and I'm very happy with that because we had the opportunity to start again with enthusiasm.

"Again we were slow in the first half and then we grew during the game but we're like that, we keep the consistency with the performance but I'm happy with that."

Bristol City boss Steve Cotterill added: "We've played well in both the games. Sometimes you get that opportunity in a home game to get a result but we didn't do that. They're a good team, they've got some very good players.

"Had our chances gone in in the first half it might have been a different game but good luck to them Watford, they're a good club."