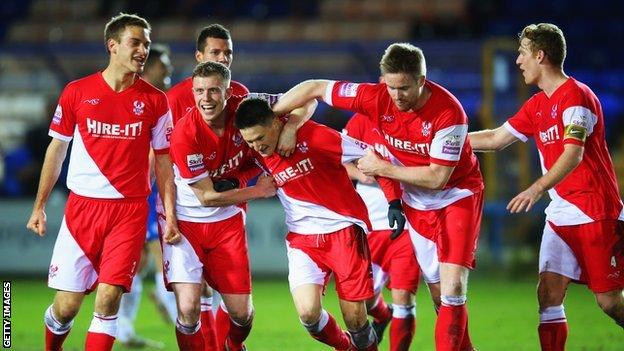 Joe Lolley earned non-league Kidderminster an FA Cup fourth-round trip to Sunderland with a shock winner against League One Peterborough in what could be his final game for the club.

Tommy Rowe bundled Posh ahead on 26 minutes, before Michael Gash levelled with a second-half header.

Mark Little then hit the post for Posh before Jack Byrne swept Harriers ahead.

Lolley, 21, who was linked with a move to Peterborough but is now expected to sign for Championship side Huddersfield Town, made a lively start.

But Peterborough controlled possession for long periods of the first half with Posh captain Rowe pouncing from point-blank range to open the scoring after a Danny Kearns cross hit the post.

It was the last major impact Rowe was to have on the game, with the midfielder forced off injured before the break.

Harriers rarely threatened before Gash equalised against his home town club with a towering header from a Danny Jackman cross.

The goal sparked four frantic minutes, Little hitting the post before Byrne linked up with Lolley to put Kidderminster in front for the first time.

When Assombalonga converted from the penalty spot 16 minutes from time, Posh manager Darren Ferguson looked to have been handed an FA Cup lifeline.

Two years after winning the FA Cup with Wimbledon in 1988, the centre-half was in the Crystal Palace team that lost to against Alex Ferguson's Manchester United in a replay - his first trophy.

However, within two minutes, Lolley cut inside to net his 11th, and possibly last, Harriers goal to set up a trip to the Stadium of Light on 25 January.

Kidderminster's first away win in seven games was also a second successive victory for new manager Andy Thorn, sacked by Coventry City in 2012. who returned to football management last week for the first time since his sacking by Coventry City in August 2012.

Thorn, 47, took over following Steve Burr's sacking by the Conference Premier side just three days after forcing Peterborough to a replay with a 0-0 draw at Aggborough.

Thorn has FA Cup pedigree as part of Wimbledon's Crazy Gang, famously winning it as part of the side that beat Liverpool 1-0 in 1988.

Posh's defeat was particularly painful for Posh director of football Barry Fry, who was manager of Birmingham City when Harriers were on their last giantkilling FA Cup run 20 years ago.

"I'm immensely proud of the players. We spoke before the game about how special the FA Cup is. And we all had a night to remember. The fans were incredible too.

"We deserved it. We were prepared. We came with a game plan. And, even at 1-0, we felt that we'd some really good chances and that it was just a case of taking one of them. But we ended up taking three.

"We had a massive incentive of going to Sunderland. Now we can go up there to the Stadium of Light, one of the best grounds in the country, and have a fantastic day out.

"We'll enjoy tonight but the focus is still firmly on Aldershot on Saturday."