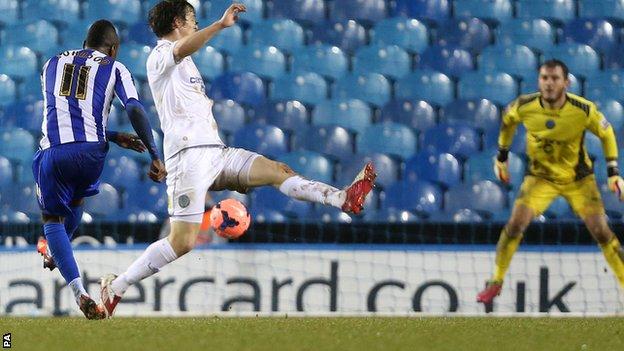 Sheffield Wednesday survived a scare to beat a spirited Macclesfield Town in their FA Cup third-round replay at Hillsborough.

The Conference Premier side hit the crossbar when the scores were level after Scott Boden's second-half penalty had cancelled out Chris Maguire's goal.

But late goals from Jacques Maghoma, Jermaine Johnson and Miguel Llera saw off the resurgent non-league side.

Wednesday will travel to Rochdale in the fourth round.

The home side took the lead after just three minutes through Maguire's low shot.

The Scotland international cut inside past two defenders following a mistake from Andy Halls to fire past Macclesfield keeper Rhys Taylor.

Maguire went close to doubling the lead after 20 minutes when he shot over the bar before having another effort cleared off the line.

Danny Whitaker and Jack Mackreth had Macclesfield's best chances of the first half, but did little to test Wednesday keeper Damian Martinez.

The visitors came out stronger after the break and were awarded a penalty when the ball appeared to strike the arm of substitute Joe Mattock.

Scott Kay then missed a glorious chance to put the visitors ahead as he hit the crossbar. Kay lacked composure as he followed-up his original left-footed shot which Martinez could only parry.

Wednesday appeared on the back foot, but Maghoma turned the game back in their favour after a great run from Johnson.

He picked up the cross from the left to put a low left-foot shot past Taylor.

Johnson put the tie to bed five minutes from time shooting right-footed from outside the area for Wednesday's third before Llera's stoppage-time header from a corner rounded off the scoring.

"The hardest thing was getting the players up for it again after the high of beating Leeds, without being disrespectful to Macclesfield.

"We knew they would have a 10-minute period in the game and they did, but in the end our class showed with our pace in the side and it's nice to get four more goals in front of our own fans.

"All I can do is keep on winning games and if I can do that then the chairman has a decision to make. I haven't heard anything else about the job yet."

"I am very proud, I don't think we could have given anymore than we did.

"The first goal knocked us back but in the second half we had a chance to win the game but it wasn't meant to be.

"Sometimes it's your day, sometimes it isn't. Tonight wasn't our day. On another day we get all the headlines."