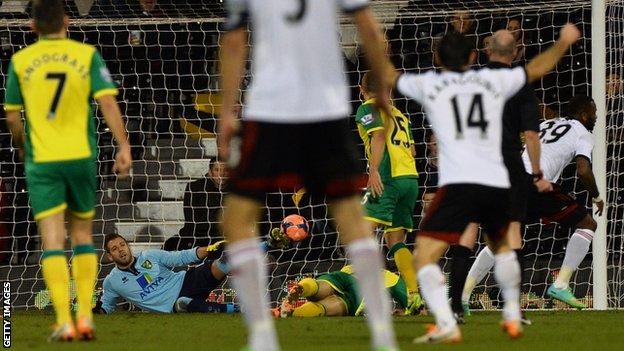 Striker Darren Bent opened the scoring in their third-round replay when he turned in Pajtim Kasami's cross.

Norwich hit the bar through Robert Snodgrass with the score at 0-0.

The Canaries have now failed to score in three of the last five games.

But Chris Hughton's side are without a win in their last eight league and cup games and are left to concentrate on fighting for their Premier League lives.

The Canaries are two points above the relegation zone and face a crucial home game against Hull City on Saturday, when new signing Jonas Gutierrez is expected to make his debut.

They started well, Snodgrass hitting the bar from 20 yards moments after Nathan Redmond had been denied by Fulham's Netherlands keeper Maarten Stekelenburg.

But Norwich quickly faded and allowed the Cottagers to establish a commanding 2-0 interval lead.

The hosts, who made nine changes to the team hammered 4-1 at home to Sunderland on Saturday, were ahead when Bent, starting in place of Dimitar Berbatov, netted in the 17th minute.

The on-loan Aston Villa forward was well placed to net from 10 yards following a low cross by Kasami from the right, It was the 29-year-old's fifth goal in 20 appearances since joining last August.

Fulham were boosted by the long-awaited return of Brede Hangeland from a back injury and the Norway defender added much needed steel to a Cottagers defence that had conceded 21 goals in the previous seven games.

Norwich struggled to re-discover their early flourish and Dejagah doubled the lead in the 42nd minute with a simple tap-in after Kacaniklic had rolled the ball into his path.

Even the introduction of record signing Ricky van Wolfswinkel at the start of the second-half failed to inspire the visitors as Fulham recorded their first clean sheet win since 8 December.

Norwich's miserable night was complete when Sidwell headed in Sascha Riether's cross at the far post to present Rene Meulensteen with his biggest win since taking charge last month.

Fulham manager Rene Meulensteen: "Our desire has never been in question but that desire and urgency has mainly been in going forward and it's cost us at times, particularly defending set-plays and counter-attacks.

"Today we made sure we were in good shape, working hard to get back into that shape and making it difficult.

"It's a good feeling after the unpleasant result against Sunderland [Saturday's 4-1 defeat]."

Norwich boss Chris Hughton: "It's a tough period, but I wouldn't say it's my toughest period..

"We're three points away from 10th place and there are teams that have deemed to have had good seasons that are perhaps one or two points ahead of us in the division.

"So sometimes we have to look at what the reality is, but at the moment we're hurting because we haven't done well enough to win today."