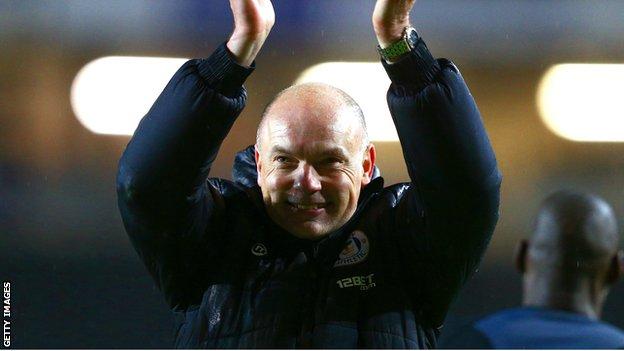 Luke Chadwick met Ben Reeves's cross to put the hosts in front at half-time in their third-round replay.

Shaun Williams then hit a Wigan post after the break before Powell touched in Chris McCann's cross.

Powell finished coolly in the first minute of extra-time before Marc-Antoine Fortune secured a fourth-round home tie against Crystal Palace.

Wigan avoided the embarrassment of becoming only the second FA Cup holders since 1998 to be knocked out in the third round.

Uwe Rosler's Championship side had been lacklustre until the second-half introduction of 19-year-old Powell, on loan from Manchester United, as a substitute.

They looked to be heading out of the competition they won eight months ago - shortly before their relegation from the Premier League.

A 3-3 draw 10 days earlier had brought about this replay, in which the Dons had suggested they had the tools to cause an upset.

And Rosler's decision to use two midfielders in a central defensive trio - with Ben Watson and McCann joining recognised centre-half Leon Barnett at the back - left Wigan noticeably exposed.

Daniel Powell, as he would for most of the evening, found space in the channel between full-back and centre-half in the first minute, but hit a tame effort.

Counter-attacks provided the Latics' best opportunities, and James McClean scuffed wide in a high-tempo opening to the game.

But MK were ahead in the 10th minute, with Reeves finding a gaping space behind the Wigan back line and hoisting his cut-back into the path of the onrushing Chadwick - playing his first game since November after an injury lay-off - who slotted past keeper Ali Al-Habsi.

Wigan, despite looking uncomfortable in their own half, saw a Fraser Fyvie shot saved by David Martin before Roger Espinoza crashed over from a tight angle.

It was Al-Habsi in the opposite goal who remained the busiest though, touching Shaun Williams's free-kick around the post and somehow getting an outstretched left hand to Dean Lewington's drive.

Wigan continued to frustrate in the second half, and while dominating possession, looked to be running out of ideas, despite having four of their players from last season's final on the field - Emmerson Boyce, Jordi Gomez, Espinoza and Watson, the goal hero in that famous win over Manchester City at Wembley.

In fact, it was MK, soaking up the pressure and breaking through the superb link-up play of on-loan Aston Villa youngster Samir Carruthers, who carved out the better chances, with Reeves flashing over and Williams slapping the post with a deflected volley.

But the leveller, with 11 minutes of normal time remaining, came from the first decent cross provided by a Wigan player, with McCann whipping in a vicious ball that Powell nudged in from close range to notch his ninth of the season.

The teenager's presence not only seemed to lift the Latics, but also injected a rare bit of genuine quality for the visitors that will have undoubtedly piqued the interest of Manchester United boss David Moyes.

With extra-time barely having started, Powell raced away from the Dons defence and applied a superb chip over Martin to put his side in front for the first time.

And the persistent home side, noticeably tiring, were finished off when Espinoza fed Fortune, who finished from 10 yards out.