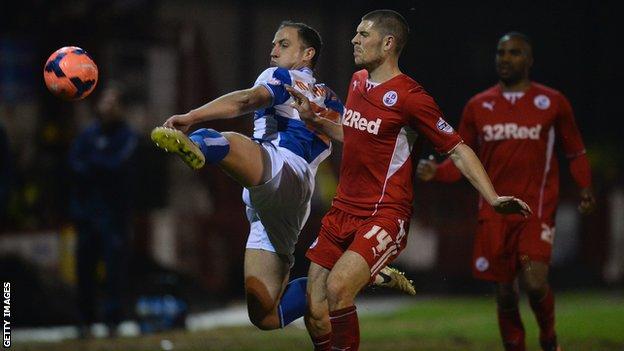 An Elliot Richards volley with seven minutes remaining cancelled out Jamie Proctor's first-half header and looked to be sending the game into extra time.

But John-Joe O'Toole proved the match-winner in stoppage time as he finished from close range after Richards' initial effort was saved by Paul Jones.

Rovers will play Birmingham City away in the third round next Wednesday.

The two sides, who drew 0-0 in the initial tie on 7 December, finally settled their second round replay at the third attempt.

On 18 December, the match was abandoned midway through the second half because of a waterlogged pitch, and the fixture was re-arranged for Saturday, 4 January.

However, the match was postponed when the pitch at the Checkatrade.com Stadium failed an inspection.

The eventual winners of the third-round tie between Birmingham and Bristol Rovers will welcome Premier League side Swansea City, who knocked out Manchester United last weekend, on the weekend of 25-26 January,

"In the second half, we didn't play as well as the first half. One-nil up at half-time, it doesn't happen very often that it ends up in a defeat. We just had to keep a clean sheet in the second half and we didn't.

"Credit to Bristol. They put four on up front and just stuck the ball in our half of the pitch as often as they could. They had the wind behind them as well. They deserved to win it - we didn't.

"You don't get too carried away when things are going well, you just keep everyone's feet on the floor, and likewise after a poor result, you have to stay calm with everything.

"It's not time for ranting and raving. It's time for a composed head and hopefully 11 composed heads when we get on the field against Coventry at the weekend."