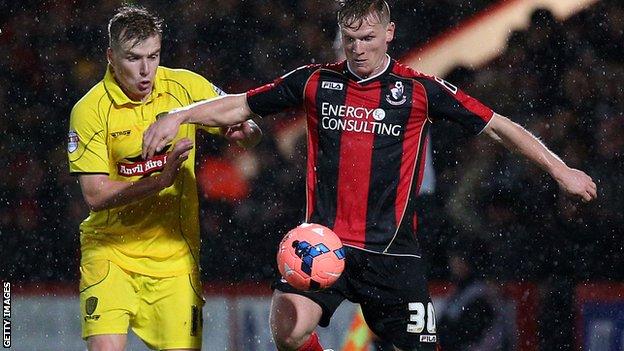 Bournemouth sealed a glamour tie against Liverpool in the fourth round of the FA Cup after defeating League Two side Burton Albion.

Brett Pitman's early finish and Tommy Elphick's close-range strike made it 2-1 at the break with Burton's equaliser coming through Jimmy Phillips.

The home side's dominance could have brought more goals but Marc Pugh and Lewis Grabban also struck the post for the Cherries.

Following the postponement of the original fixture, Bournemouth's fans raised £3000 to help fund four coaches for Burton's supporters to travel to the game.

But those fans who made the journey to the south coast soon found their side 1-0 down within five minutes through Pitman's strike.

League Two Burton reacted well to that early setback though, with Adam Buxton going close to an equaliser as he found himself one on one with Ryan Allsop - eventually firing at the legs of Bournemouth's keeper.

Rantie went close to doubling Bournemouth's lead with a rasping drive from 20 yards that stung the palms of Lyness and the Cherries were made to rue that miss with Burton equalising soon after.

Phillips scored the leveller with his speculative effort from 20 yards deflected past keeper Allsop.

Pitman should have instantly put the Cherries back in front but his shot from 12 yards was superbly kept out by Lyness.

Lyness was also equal to a low strike from Daniels but moments later he was powerless to keep out Elphick's effort from close range as Bournemouth's pressure finally told.

Pugh almost made it 3-1 after the break, striking a low shot against the outside of the post, following Simon Francis' cross from the right.

Lyness kept out another low strike from Pitman as the Cherries went in search of a third and it came with four minutes left as substitute Fraser showed great composure to chip over the advancing Lyness.

Pitman added gloss to the score with a late penalty after Harry Arter had been felled in the box while Grabban also struck the outside of the post in the dying moments.

Bournemouth manager Eddie Howe said: "The league is our priority this season. We want to do well in the FA Cup and the Liverpool one is a game ahead in the calendar that we can look forward to and enjoy, but up until that point we have to do our work in the league.

"We have got a very level-headed group of players who know they have to work hard to get success that they deserve. The Liverpool game is a nice one but it is not what we train to do every day."

Burton boss Gary Rowett added: "I'm just disappointed for the players. I don't think they did themselves justice in key parts of the game. And to concede the goals the way we did never gave us a chance.

"They are a good side and it is a good lesson. We have got to take one or two things out of that game to be a better side."