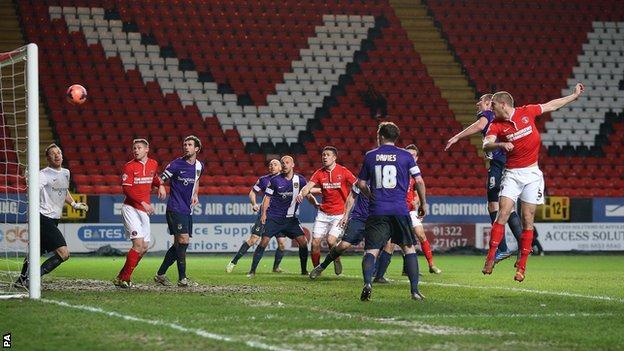 Charlton fought back from two goals down to earn themselves an FA Cup replay against League Two side Oxford United at a rain-soaked Valley.

John Mullins opened the scoring with a deflected effort and Oxford made it 2-0 when Scott Davies fired home after being played in by James Constable.

Charlton were much improved after the break with Michael Morrison heading in a corner to give his side hope.

And Yann Kermorgant's superb 82nd-minute volley earned his side a replay.

The match had been postponed twice because of a waterlogged pitch, while Charlton's match at home to Barnsley on Saturday was also called off.

And on a mudbath of a pitch - which hosted Premier League football as recently as 2007 - Charlton struggled to find any rhythm, with the conditions contributing to a string of early mistakes from the home side.

Oxford took advantage as their energetic pressing game helped them to the lion's share of possession and when Mullins fired home, with the benefit of a deflection, it was no less than the visitors deserved.

The U's doubled their lead just 11 minutes later, with Davies finishing clinically after being played in by Constable and Sean Rigg could have made it 3-0 soon after, but fired just over after picking up a loose ball on the edge of the area.

The Addicks were booed off at the break having struggled to draw a save from Oxford goalkeeper Ryan Clarke, but they came out for the second half with much greater urgency and forced a series of early corners.

It was from their third corner that Charlton cut the deficit with centre-back Morrison heading home powerfully from inside the six-yard box.

Johnnie Jackson went agonisingly close to an equaliser, but Kermorgant did find the back of the net with an excellent volley after getting on the end of Danny Green's searching cross.

Charlton manager Chris Powell: "That first half was easily worst 45 minutes since I've been manager here.

"I told them I don't ever want to see that again from them. It was unacceptable.

"Forget the pitch, it was a side that didn't play to our standards and didn't compete.

"The crowd showed their displeasure at half-time which is absolutely correct and we turned it around and nearly won it at the end."

Oxford manager Chris Wilder: "Do I fancy us now - not with our home record!

"I'd rather come back here. The pitch was a leveller for us, in terms of the quality Charlton can produce, and we managed to make a tie of it.

"I sympathise with Chris Powell, he's got an excellent passing team and it's a tough gig to play on that every other week.

"Credit to them for the character they showed in not wanting to get knocked out by a team two divisions lower."