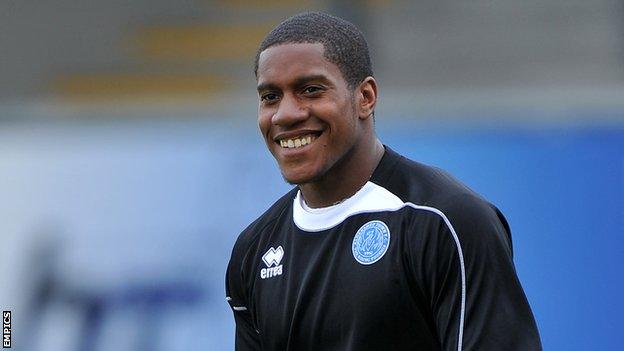 The 26-year-old Grenada international left the Electrical Services Stadium last summer after spending the 2012-13 campaign on loan at Woking.

Bubb, who initially joined Aldershot in summer 2011 from Farnborough, scored 18 goals in 36 league appearances for the Cards last season.

He spent the first half of this season at Royal Antwerp in Belgium.

Bubb scored 40 goals in two seasons at Farnborough but failed to find the net in 11 appearances for the Shots.

He has not received international clearance in time to play in Saturday's FA Trophy tie against Guiseley.

"It feels good to be back," Bubb told BBC Surrey.

I tried to re-sign him in the summer but he felt he wanted to try his hand abroad in Belgium. He is a goalscorer, knows the club and has a point to prove

"I want to help Aldershot push up the table. People only saw glimpses of me and saw I could score goals at other clubs.

"I want to do the same here and show the fans what I can do. I've got to work hard and show the gaffer [Andy Scott] I deserve a place in the team."

All but one of Bubb's appearances for Aldershot came as a substitute and he was loaned to Woking after a fall-out with former Shots boss Dean Holdsworth.

"When I took over last February I wanted to bring him back but it wasn't possible because of the loan conditions," current Aldershot manager Andy Scott said.

"I tried to re-sign him in the summer but he felt he wanted to try his hand abroad in Belgium.

"We have been working on this for the last couple of months and wanted to be ahead of the game.

"He is a goalscorer and every team needs one. He knows the club and has a point to prove."

Bubb failed to score in four league appearances for Royal Antwerp but he does not regret his decision to quit Hampshire to play in the Belgian second division.

"I'd have liked to have played more but things didn't work out like that," he said.

"I know I have progressed in my ability and my fitness and work rate have got better. It was a good experience."