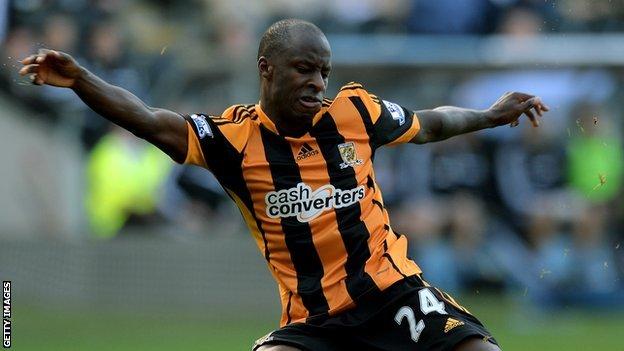 Hull boss Steve Bruce believes securing striker Sone Aluko on a new contract could be his most significant business of the January transfer window.

The 24-year-old Nigeria international, whose deal was due to expire in the summer, agreed a two-and-a-half-year extension last week.

"It could be the most important piece of business we do this month," Bruce told the Hull Daily Mail.

"He's a special player for us, I've said that all along."

Aluko, who is currently out with an Achilles injury, has scored nine goals in 31 league appearances since joining the Tigers in July 2012.

"If Sone gets fit over the next couple of weeks, he's a top player as we've seen time and again," Bruce added.

And Aluko is desperate to get back on the field, having been out since mid-October, to repay the confidence shown in him by his manager.

"The manager and the owners have shown a level of faith in me and I have to repay that by playing well on the pitch. That has always been my priority.

"I'm trying not to set any deadlines and I'm just taking it day by day but so far it's gone according to plan and I think I'm maybe even ahead of schedule so hopefully I'll be back playing soon.

"I believe that when I get back playing, I'll hit the ground running and recapture the form I was in before."