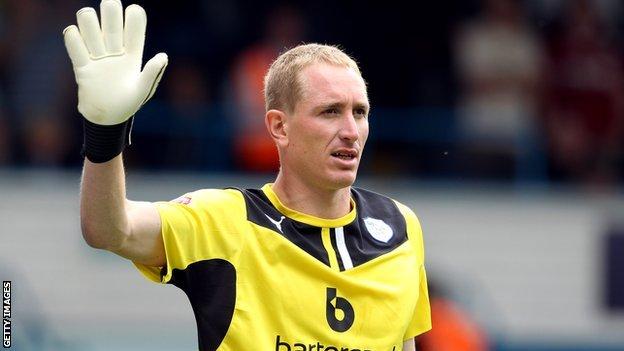 Gray, 53, has guided the Owls out of the Championship relegation zone since taking over afterw Dave Jones was sacked at the start of December.

Chairman Milan Mandaric suggested before the 2-0 win over Blackpool on 1 January he would make a decision over a permanent appointment this week.

"We'd all like Stuart to get it," Kirkland told BBC Radio Sheffield.

It's a fantastic club and the fans have been superb with me since I joined. Hopefully I can stay beyond this season

"The players all think he's done a great job and we've got some very good results under him.

"When we were struggling this time last year, Dave brought Stuart in and he was a major part in us staying up then.

"Hopefully the chairman will give him a shot but if he doesn't then we'll all get behind whoever comes in."

Gray recalled Kirkland, 32, to the side in place of Arsenal loanee Damian Martinez for the Boxing Day fixture against Blackburn.

After keeping two clean sheets in three league matches, the former Liverpool and Wigan man - whose contract at Hillsborough runs out at the end of the campaign - is looking to cement his position as the club's first-choice keeper.

"It was tough being left out and obviously I was upset but it made me determined to work even harder," he added.

"There were some conspiracy theories going around that I'd been dropped because of some contract clause but that was total nonsense. The previous manager didn't think I was playing well enough and he dropped me.

"I'm experienced enough now to know these things happen in football but thankfully I'm back in the side now and I don't want to let it go.

"It's a fantastic club and the fans have been superb with me since I joined. Hopefully I can stay beyond this season."

The Owls, who are currently one point clear of the bottom three, host Yorkshire rivals Leeds on Saturday.