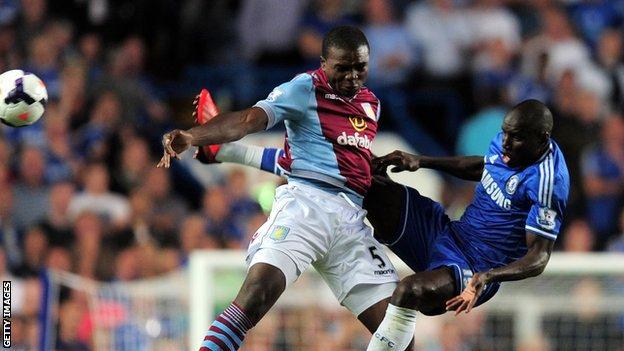 Aston Villa defender Jores Okore says he hopes to return from a serious knee injury within two or three months.

Denmark international Okore, 21, ruptured his anterior cruciate ligament in only his fourth match for the club against Newcastle in September.

It was expected that the Ivory Coast-born player could be out for nine months and miss the rest of the season.

But he tweeted: "People are asking when I'm back playing. I'll be back playing in two to three months' time."

Okore returned to training on Monday and added: "First full run up in 2014 went great! When coach is happy, I'm happy!"

He joined Villa in the summer from Danish side FC Nordsjaelland on a four-year contract.

The news will be a boost to struggling Villa, who lost striker Libor Kozak for the season after he broke his leg in training last week.

Villa have not had a settled central defensive partnership this season with injuries at various stages to skipper Rob Vlaar, Nathan Baker and Ciaran Clark.