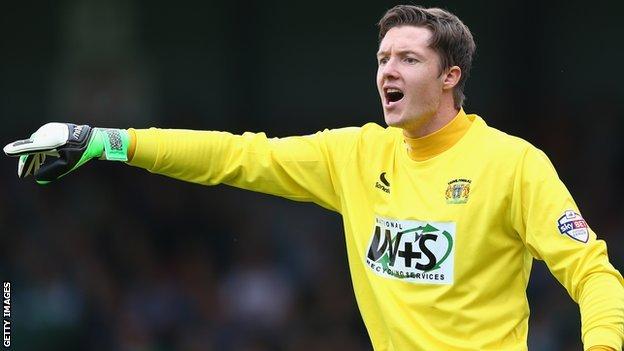 Wolves goalkeeper Wayne Hennessey has apologised to the club's fans after refusing to play against Gillingham.

The 26-year-old, who was replaced by Aaron McCarey for last Friday's 1-0 defeat, said recent transfer speculation had affected his focus.

Hennessey is available for selection for Saturday's game against Preston.

"With hindsight I'd have done things differently, and I know that whatever I say is not going to change what I have done but I am sorry," he said.

McCarey, 21, was used against the Gills, with Wolves' first-choice keeper Carl Ikeme out of action with a broken hand.

Meanwhile, Wales international Hennessey has been linked with a move back to the Premier League, with Crystal Palace rumoured to be among his suitors.

He has made 165 appearances for Wolves but has not played for the League One club since suffering a cruciate knee ligament injury in April 2012, an injury which saw him miss the whole of last season.

He had been out on loan at Championship side Yeovil this season, making 13 appearances for the Glovers.

"I have apologised to [Wolves boss] Kenny Jackett but I also wanted to apologise to the club and the supporters," he added.

"They have always been great to me while I have been at Wolves through the good times and also my recent injuries when I worked really hard to get back.

"I just want to try and make fans aware of what I was thinking, and why I thought I was doing the right thing for myself and for the club.

"I assumed that with the transfer speculation surrounding me it would make sense, both for me and the club, not to play in the game but I realise that I was wrong.

"For me now I just have to get my head down and get on with it and try and put it right, which is to carry on working hard - as I have done through all of my nine years at Wolves - and be available and ready for selection."