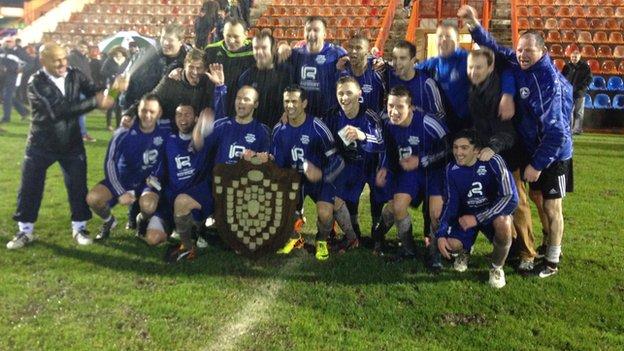 Grouville lifted Jersey's inter-parish Trinity Shield for the first time since 1929, thanks to a 6-5 win over St Saviour in an action-packed final.

James Hudson's stoppage time volley gave Grouville the lead for the first time in a remarkable game, in atrocious conditions at Springfield.

It's probably the strangest game I've ever seen

But they finished with eight men as Matt Rondel, Luc Le Miere and skipper Jack Cannon were all shown red cards.

"I can't believe that we've gone on and won.

"To score the last goal in the last kick of the game was the best way to get into the lead, what a way to win it."

Daryl Wilson's first-minute opener for St Saviour was perhaps an early sign of the goal-fest which was to follow, but the crowd had to wait half an hour for the second, when Jake Dunford pulled Grouville level.

Wilson's second goal, prodded in from Barry Keith's through ball, put his side back ahead, only for Grouville to draw level just before the break. Rondel was sent off after bringing Charlie Petulla down in the box. Petulla's penalty was saved by Bradley Rolland but the striker was composed enough to tuck away the rebound.

Jamie Savory and Craig Leitch netted after half time to give 10-man St Saviour a 4-2 advantage but Dunford hit back with his second of the game to offer his team renewed hope.

Savory rounded the goalkeeper soon after to re-open the two-goal lead but Grouville just would not lie down and Hudson's header from a long-range free-kick reduced the deficit to 5-4.

As the heavy rain continued to make even the simplest of passes or tackles a real challenge, St Saviour were reduced to nine men with five minutes to go when Luc Le Miere was sent off for a foul on Dunford in the box. Petulla netted the spot kick and it looked like the game was heading for extra time.

There was still time though for a third red card when St Saviour skipper Jack Cannon brought down Petulla outside the area.

Four minutes later, in time added on, came the winner as Hudson volleyed in at the far post following a pinpoint cross from the left to conclude a memorable match.

There was barely time for the restart before the final whistle, and Grouville could celebrate winning the Trinity Shield for the first occasion in more than eight decades.

The annual tournament, the longest running in the Channel Islands, sees players represent the Jersey parish they were born into or now live in.