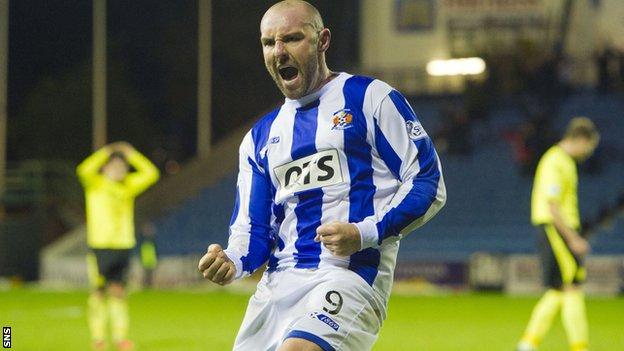 Kilmarnock striker Kris Boyd says he has not been contacted by former club Nottingham Forest over a possible return to the City Ground.

Boyd was loaned to Forest by Middlesbrough in 2011 and scored six goals in 12 appearances.

And he has been linked with a January move to Billy Davies's side, having netted 12 times for Killie this season.

"I've obviously worked with Billy before, enjoyed my time with him. Nottingham Forest are a fantastic club, a proper football club in England. They've got great history.

"I've never said that I would never want to go and challenge myself again because I said [when I rejoined Kilmarnock] I would like another crack at England.

"I'm not going to try and sell myself. I'll do my talking on the pitch and if somebody wants to come along and ask me the question then I've got that to answer.

"But right now I'm happy at Kilmarnock, I'm scoring goals and hopefully in the next couple of weeks we can maintain the form that we've shown in the last few."

Having started his career with Killie, Boyd moved to Rangers in 2006 and then on to Boro in 2010.

His loan at Forest came during Davies's first spell as manager at the City Ground and, after leaving Boro for Eskisehirspor, a move to Portland Timbers followed.

He last February and is .

"I was grateful to Kilmarnock for bringing me back when I came back from America because I hadn't played for a long time," added Boyd, who has been capped 18 times and .

"I've loved every minute of it at Kilmarnock.

"I don't want to leave Kilmarnock to go somewhere and just make up the numbers again. If I'm going to go anywhere, I want to go and play.

"If somebody comes and asks the club if I'm available, it's up to the club to decide what's to happen."