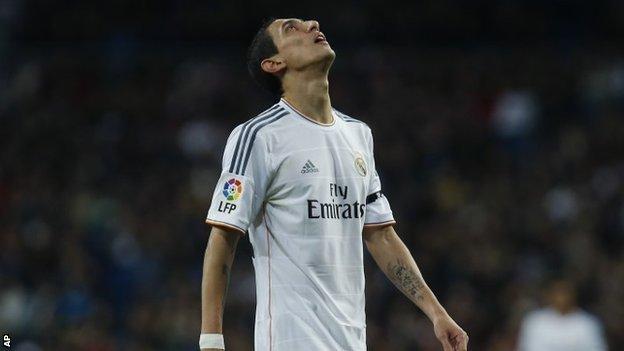 Real Madrid winger Angel Di Maria has been cleared by the club after he was seen to grab his crotch following his substitution during Monday's 3-0 La Liga win against Celta Vigo.

Di Maria, 25, made the gesture after being whistled by the Bernabeu crowd as he was replaced by Gareth Bale.

But Real Madrid said they had failed to establish any "fault" by the player.

Coach Carlo Ancelotti added that the affair was now "closed" following an apology made by Di Maria.

The Argentine, who has been linked with moves to Manchester United and Arsenal, had denied there was any malice intended in the gesture.

He told the club's website: "I made a normal gesture as I was leaving the field. I didn't mean it to be aimed at the fans nor the coach as people are saying. It was a normal gesture that any man would do, especially when you are running."

Real Madrid added: "In light of the investigation, it cannot be concluded that Di Maria is responsible for carrying out offensive and contemptuous gestures towards the public at the Santiago Bernabeu on 6 January and, therefore, he has not committed any fault deserving disciplinary action."

Real team-mate Sergio Ramos appeared to show his support for Di Maria by tweeting a photo of himself on Tuesday in front of a picture of singer Michael Jackson in his famous crotch-grabbing pose.

Di Maria is expected to start on the bench for the Copa del Rey last-16 tie against Osasuna at the Bernabeu on Thursday.

He has seen his first-team opportunities limited since the arrival of Bale from Tottenham Hotspur in September and has been linked with a move away from Madrid in the January transfer window with French Ligue 1 side Monaco reportedly interested.