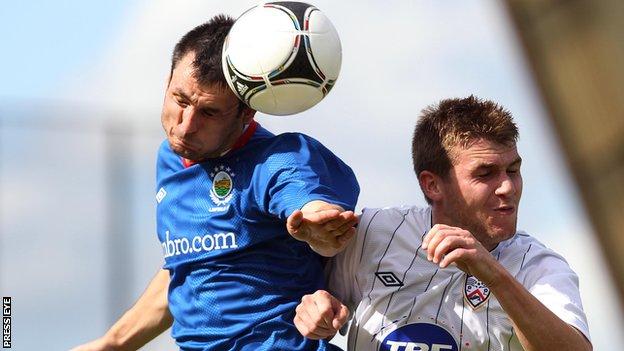 Jim Ervin has moved to Ballymena United on a two-and-a-half-year deal following his release from Linfield on Tuesday.

Meanwhile, striker Shane Dolan is leaving Ballymena and returning to the League of Ireland with Shelbourne.

Ervin's departure from Windsor Park ends a spell of nine years with the current Premiership leaders.

The 28-year-old full-back had asked to be released after failing to secure a regular starting place with David Jeffrey's side his season.

"This has been a desperately hard decision for Jim to take," said manager Jeffrey.

"I can totally empathise with him. He is approaching his 10th year at the club and he wants to play football," Jeffrey told the club website.

"Jim has been granted his unconditional release in view of his loyal and faithful service over a considerable period and in recognition of his outstanding contribution to the success of the club.

"There is a lot of football left in Jim Ervin. This is the closing of one chapter and the beginning of the next.

"Because of the high standing we hold him in and because of his exceptional service, we are not setting any conditions on his release."

This means Ervin will be able to play for the Braidmen against Linfield during the remainder of this season.

Ballymena spoke of their "delight" at landing the experienced defender.

Front man Dolan joined Ballymena a year ago from Donegal Celtic, having previously played in the League of Ireland's Premier Division with Athlone Town and Drogheda United.