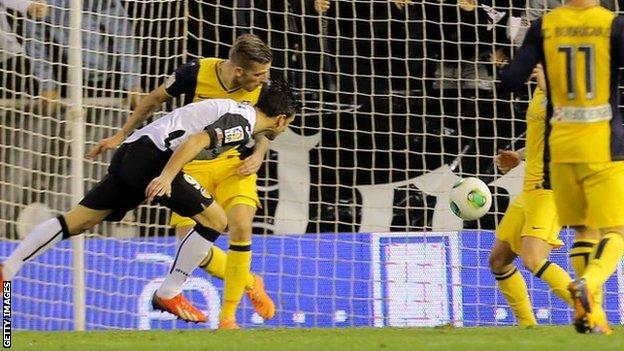 A late Helder Postiga goal gave Valencia a dramatic 1-1 draw in the first leg of their Copa del Rey tie with Atletico Madrid.

The hosts controlled the game at the Mestalla, but when Vicente Guaita's dreadful punch presented Raul Garcia with a simple finish, it seemed the visitors were on course for a win.

But Valencia created several chances and were finally rewarded in added time when Sofiane Feghouli knocked the ball back across the face of goal and Postiga converted with a header.

In only his second game in charge, Valencia boss Juan Antonio Pizzi oversaw an excellent performance, and his side will now go into next week's second leg at the Vicente Calderon with renewed hope of deposing the cup holders.

There was little indication of the drama to come in a desperately cagey first half, with Guaita's smart save from a Garcia drive a rare highlight.

But the Valencia keeper was at fault in the second period as he inexplicably flapped at a corner, and Garcia gratefully nodded the loose ball into an empty net.

The hosts attacked with renewed vigour, but they were frustrated as on-loan Chelsea goalkeeper Thibaut Courtois saved well from Feghouli and Pablo Piatti, before Sergio Canales skied a glorious chance with the goal at his mercy.

But with seconds remaining, the otherwise peripheral Postiga - who spent a season with Tottenham 10 years ago - turned in Feghouli's cross to leave the tie delicately poised.