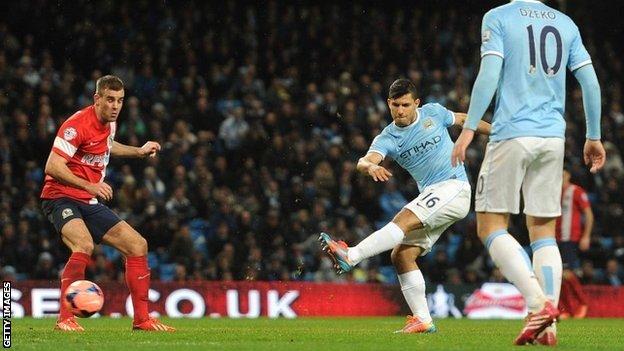 Sergio Aguero scored within a minute of returning from injury as Manchester City thrashed Blackburn to book an FA Cup fourth-round tie against Watford.

The Argentine striker has been out with a calf problem but came off the bench in the second half to turn and fire in.

By that stage, City were already 3-0 up after Alvaro Negredo scored either side of the break and Edin Dzeko squeezed in at the near post.

It was another demolition by Manuel Pellegrini's side, who drew 1-1 with Blackburn at Ewood Park in the original tie and have now scored 99 goals in all competitions this season.

Worryingly for City's future visitors, who include Cardiff next Saturday, they completed their latest rout despite not really finding their best form until after the break. The result means they maintain their 100% home record in domestic competitions.

Before the game Pellegrini had said he was seeking to complete an unprecedented quadruple this season, and he will be encouraged by Aguero's goalscoring return which took his season's tally to 20.

Amazingly, he is not even City's top scorer. That honour belongs to Negredo, who continued his remarkable first season at the club by heading in before the break and then tucking in Aleksandar Kolarov's through-ball afterwards to reach 21 goals.

But before Negredo's first, a much-changed City side had looked lacklustre in attack and played at a tempo that allowed their Championship opponents to retreat into a robust defensive formation.

Dzeko was particularly guilty, firing a succession of efforts over the bar and, for all the hosts' possession, Blackburn appeared comfortable and wasted their best chance when Ben Marshall curled a free-kick straight into the arms of Costel Pantilimon.

The 2011 FA Cup winners, who now average four goals per home game in all competitions, finally took the lead in first-half stoppage time as several Rovers players were caught up the pitch.

The ball was worked out to the right and Negredo, nicknamed "the Beast", powered in a header from Fernandinho's cross.

The striker had scored at the same stage when the sides first played, before Scott Dann surprised City with an equaliser. On this occasion, the Spaniard scored his second within two minutes of the restart to make a Rovers revival even less likely.

But once substitute goalkeeper Simon Eastwood had picked the ball out of the net - his first involvement after replacing the injured Paul Robinson at the break - the visitors were forced to come out of their shell.

Gary Bowyer's side had lost only one of their previous eight games, and after he introduced Joshua King, they twice almost clawed a goal back, the striker first heading over from Marshall's cross then failing to beat Pantilimon from Tom Cairney's through-ball.

They paid for those misses as Dzeko grabbed his 14th of the season, firing in at the near post from a Jesus Navas cutback after 67 minutes.

Aguero came on five minutes later to replace Negredo and make his first appearance since 14 December. From his first touch he gathered the ball from Gael Clichy's centre to steer in.

Dzeko and Navas then combined once more to complete Blackburn's misery, although their fans took an ironic pleasure by marking the fifth goal with the 'Poznan' celebration favoured by the home fans.