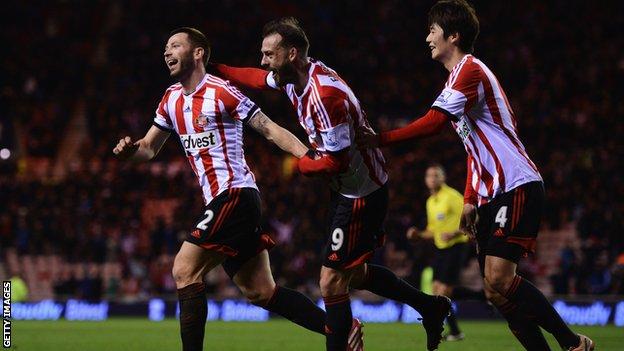 Sunderland captain John O'Shea has praised the role of Phil Bardsley since the full-back returned to the side.

But he has been an ever-present since

"Phil is a player we need to keep hold of. He's been brilliant and really has become the heart and soul of the club now," O'Shea told BBC Newcastle.

The incident that led to Bardsley's enforced exile from Sunderland involved the 28-year-old allegedly mocking their on social media.

When Poyet brought him back into the first XI for the defender was treated to jeers by a large section of the club's supporters.

But on Tuesday night, he played a vital role in while he is also the Black Cats' joint-top scorer with three goals.

"It has been a real turnaround from the Swansea game to now," said O'Shea, who

"And before that, let's be honest he was probably only inches away from leaving the club.

"But it's great that he's come back in as we need to keep players that have been here a while.

"There's Phil and Jack Colback, then after that I think I'm the longest-serving player."