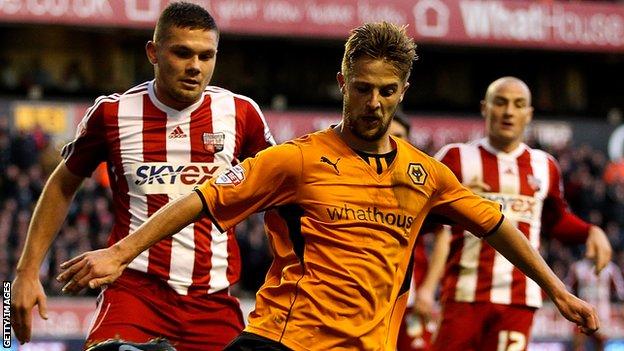 Wolves have completed the permanent signing of Derby County winger Michael Jacobs for an undisclosed fee.

The 22-year-old, who has scored once in nine appearances since joining on loan in November, has signed a two-and-a-half-year contract.

Wolves have the option to extend the deal by a further 12 months.

Jacobs scored for Northampton in a 2-2 draw at Liverpool in the Carling Cup in September 2010. The Cobblers went on win the tie 4-2 on penalties.

Jacobs started his career with Northampton and made 100 appearances for the Cobblers before moving to Pride Park in June 2012.

But he started only 15 games for the Rams, making the majority of his appearances off the bench, and feels he has benefitted from his move to Molineux.

"I feel I have got better with every game and have enjoyed having that consistency with playing," he told the club website.

"I feel like I've rekindled my love for football again which maybe I'd lost a little over the last six to eight months.

"Being given an opportunity here has helped me and I feel I'm playing with a lot more confidence."