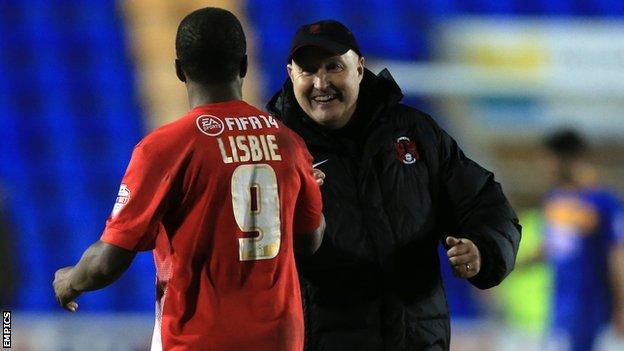 Leyton Orient manager Russell Slade says their 2-0 win at Shrewsbury on Tuesday proves his side have the mettle for an automatic promotion fight.

Victory saw the injury-hit O's return to the top two in League One.

"Cold Tuesday nights in the middle of winter will define where we are in the summer," Slade told BBC London 94.9.

"It is now we need those results. It is no good coming in in March and April and turning in a performance when it doesn't matter quite so much."

"It was important we stuck together. It was a big, big result."

Orient have led the League One table for the majority over the campaign, following a club-record start to the season which saw them win their first eight league games.

After being replaced at the top of the league by a resurgent Brentford side, the east London club slipped to third place on New Year's Day when their match at home to Bristol City was called off and Wolves drew at Tranmere.

The O's have been hit by injuries over the festive period, with goalkeeper Jamie Jones out for three months and forward Shaun Batt likely to miss the rest of the season.

The resilience is there for all to see and it is one of the great factors we have got in the side. These are special days at this football club

"The resilience is there for all to see and it is one of the great factors we have got in the side," Slade said. "They are all prepared to take one [for the team] and do it for each other.

"For me, these are special days at this football club.

"We just need to keep the momentum going, nurse players back to full fitness and I'm sure we can finish off the job we started in the summer."

Orient won at Greenhous Meadow thanks to a first half-strike from Moses Odubajo and a late own goal.

On-loan keeper Elvin Jakupovic and forward Jamar Loza made their debuts for the Londoners and Slade praised the latter for his role in Odubajo's goal.

"Jamar's got loads of potential and we were pleased with his contribution," he said.

"Inevitably he's playing under-21 football so it is very difficult for him to adjust to first-team football so quickly. But he did well.

"It was a great little ball for Mo for the goal that got us in front."