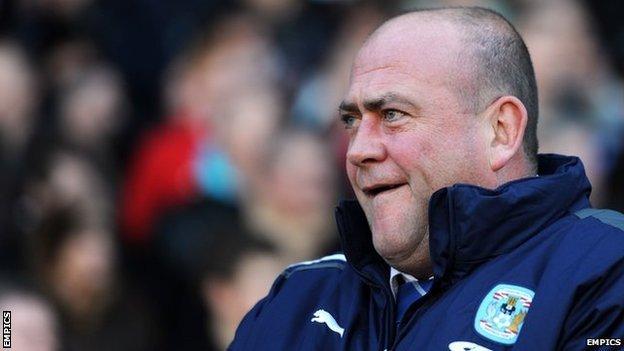 Kidderminster Harriers have appointed Andy Thorn as their new manager following the sacking of Steve Burr.

Thorn, 47, sacked by League One side Coventry City in August 2012, has signed a one-year rolling contract.

Harriers chairman Mark Serrell said: "I've known about Andy and his qualities for quite some time.

"And, once we were presented with the challenge of finding a new manager, he was at the forefront of my mind. His contacts in the game are exceptional."

Serrell added: The entire board have been simply blown away by his enthusiasm and desire to succeed both personally and for us here at Kidderminster."

But he has now taken the chance to return to management with the Conference Premier promotion hopefuls, who have slipped from second to seventh, 15 points behind leaders Luton Town, after a run of four defeats in five league games.

"I have been most impressed by all aspects of the club," said Thorn.

"The board share my vision when it comes to what our short and longer-term goals are and how we can achieve them.

"I'm extremely confident in my own strengths, particularly when it comes to man management and player recruitment.

"And, allied with what I believe is an excellent coaching staff here at Kidderminster, I am very excited at the challenges that lie ahead and look forward to starting straight away this weekend against Salisbury."

Getting Harriers' league campaign back on course is the main priority but Thorn has also inherited a side still in the FA Cup.

After holding League One side Peterborough United in Saturday's 0-0 draw at Aggborough, Burr's last game in charge, Harriers will go to London Road next Tuesday night (14 January) hoping to upset the odds and book a fourth round tie at Premier League side Sunderland.

Harriers have moved swiftly following Serrell's initial indication that they had no immediate candidate lined up.

The chairman also admitted: "It's going to be a difficult job to follow in Steve's footsteps.

"He has been extremely successful and will be a hard act to follow," he told BBC Hereford & Worcester.

Getting to the Football League is really hard. I'm not sure what their expectations are

The Harriers board have stated that their reason for making the change was to keep the club on course for promotion back to the Football League for the first time since being relegated in 2005.

But former Kidderminster captain Ian Clarkson, who skippered the club when they first went up in 2000, warns that climbing out of the Conference is not easy.

"Getting to the Football League is really hard," he said. "I'm not sure what their expectations are.

"I'm just shocked, to be honest. I find it absolutely bizarre," said Clarkson, who spent a brief spell in charge as joint-caretaker manager following Jan Molby's departure to Hull City in March 2002.

"Yes, they have had a blip but they've just held a League One side to a draw in the FA Cup. That doesn't sound like a side who are in crisis."

Meanwhile, Harriers have been hit by an injury blow to midfielder Callum Gittings, which could keep him out until the end of the month.

Having come off just after the break in Saturday's Cup tie at Aggborough with a hamstring injury, scans have revealed that he has also chipped a bone in his shoulder.