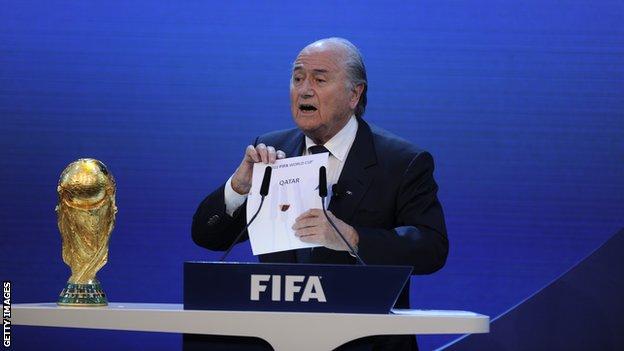 Fifa has moved quickly to play down claims from its own general secretary that the Qatar 2022 World Cup will not take place in the summer.

The sport's governing body stressed no final decision will be taken until after the 2014 World Cup and only after lengthy consultation.

The consultation process will not be rushed

It comes after Jerome Valcke told Radio France: "The dates for the World Cup will not be June-July."

He suggested it could take place between 15 November and 15 January.

Fifa president Sepp Blatter had already said the tournament would take place in November or December, with organisers in Qatar still hopeful of hosting it in June and July.

Following Valcke's Radio France interview, a Fifa spokesperson said the general secretary had only been expressing "his view".

The spokesperson added: "The precise event date is still subject to an ongoing consultation process which involves all main event stakeholders, including both the international football community - Fifa confederations, member associations, leagues, clubs, players - as well as Fifa's commercial partners.

"The consultation process will not be rushed and will be given the necessary time to consider all of the elements relevant for a decision.

"No decision will be taken before the upcoming 2014 Fifa World Cup Brazil as agreed by the Fifa executive committee."

The Qatar 2022 Supreme committee said they "will be ready to host the World Cup regardless of the outcome of the consultation."

Britain's Fifa vice-president Jim Boyce said he was "totally surprised" at Valcke's statement and confirmed the decision had to be taken by the executive committee.

The scheduling of the tournament has been debated since it was controversially awarded to Qatar in December 2010.

Fears have been raised that the summer heat in the Gulf emirate would be dangerous for players and fans alike.

Valcke said: "If you play between 15 November and the end of December, that's the time when the weather conditions are best, when you can play in temperatures equivalent to a warm spring season in Europe, averaging 25 degrees. That would be perfect for playing football."

There have been 19 World Cups to date but no World Cup finals match has ever been played outside May, June or July

If the World Cup does go ahead at the end of 2022, it could pose problems for the Africa Cup of Nations, which is scheduled for January 2023.

Blatter said two months ago that a firm decision on dates for the 2022 World Cup will be made in December 2014.

Qatar organisers have indicated it would be happy to switch to a winter World Cup.

Failed bidders Australia have vowed to seek compensation from Fifa if the 2022 World Cup is played in winter.

None of the 19 World Cups to date have ever been played outside the months of May, June or July.