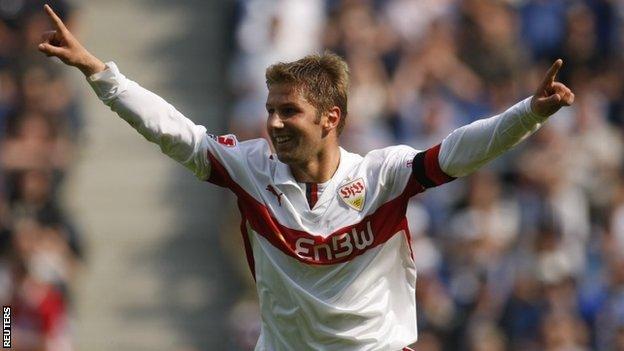 German football has rallied around Thomas Hitzlsperger after the former international midfielder revealed he was gay.

In an interview with newspaper Die Zeit, Hitzlsperger said he was coming out to advance discussion of a topic that was "simply ignored" in German football.

He is the most prominent footballer to publicly reveal his homosexuality and his former team-mates were quick to praise his announcement.

Arsenal and Germany forward Lukas Podolski wrote on Twitter: "Respect to Thomas Hitzlsperger! That was a courageous and correct decision and an important step."

And retired defender Arne Friedrich, who played with Hitzlsperger at Euro 2008, wrote: "Proud of you Thomas. A good decision and in my opinion the right time."

There was also support for Hitzlsperger from leading figures in German football administration.

"Finally, a footballer has the courage to make his sexuality public," said Theo Zwanziger, the former president of the German Football Association.

Bundesliga president Reinhard Rauball said in a statement: "The decision of Thomas Hitzlsperger to be the first prominent footballer to make public his homosexuality is - even after his active career - a huge and courageous step, and surely leads the way in the fight against homophobia."

Thomas Hitzlsperger has shown a lot of courage today. Sad times when people have to wait till they retire from their chosen profession...

...before the feel other people will judge them solely on who the human being is. Shame on all of us as a society.

Congratulations to Thomas Hitzlsperger - welcome to the club!

Bayern Munich, the club where Hitzlsperger began his career as a junior, also tweeted their support for the midfielder's "brave step".

Hitzlsperger's announcement is seen as a watershed moment in Germany, which like England has struggled with the problem of homophobia in football.

Zwanziger admitted that football was "now as ever a hard business, where unfortunately an open discourse about homosexuality is still not taken for granted".

Current Germany captain Philipp Lahm created controversy in 2011 when he wrote in his autobiography that he would encourage gay footballers to keep quiet about their sexuality.

"I would not encourage any gay professional footballer to come out," he wrote at the time. "I would fear that he would end up like Justin Fashanu [the English footballer who killed himself after revealing that he was gay]."

The last German footballer to come out was second tier player Marcus Urban, who told Die Welt in 2007 that he knew of at least three gay footballers in the Bundesliga who were too scared to reveal their sexuality.

"It's good that he's spoken about something which is important to him," Seibert told a media briefing.

"We live in a country where nobody should be worried about making his sexuality known or concerned about intolerance.

"We judge footballers on whether they have behaved well and worthily on and off the pitch and I believe that both are the case with Mr Hitzlsperger."

Openly Gay German politician Volker Beck said he hoped Hitzlsperger's announcement would encourage others to do the same.

"I hope that Hitzlsperger's courageous step contributes to finally breaking down this taboo," he said. "It's now the job of the German FA to embolden active players [to do the same]."

And Zwanziger said he was optimistic that Hitzlsperger's announcement would lead to greater openness about sexuality in German football.

He said: "I'm confident that sexual orientations will soon not be an issue in football at all."