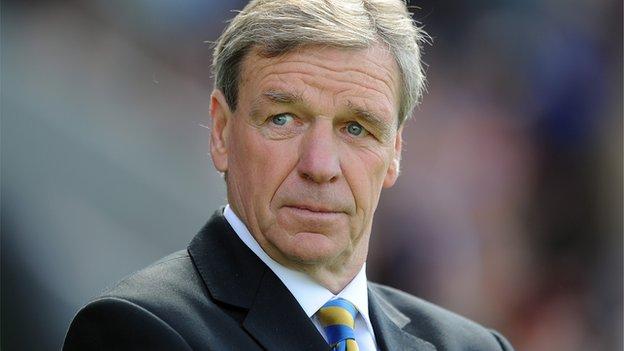 Shrewsbury Town boss Graham Turner is hoping to make signings in January as he attempts to "put right" his club's downturn in League One.

Five successive home defeats have caused Town to slip to within two points of the danger zone.

"If somebody comes in that will be very nice. It's what we're working towards," Turner told BBC Radio Shropshire.

"But the thing we've got to concentrate on putting right is what we've got at the club and how we can improve."

Turner has plenty of scope to work with, in terms of spaces in his squad.

At one time, back in the autumn, he had more loan players at the Greenhous Meadow than he had places available for them in the team.

"Graham Turner continues to insist that, at 66, retirement remains a long way off, but he has come under real pressure in recent weeks from fans who haven't seen a home win since November.

"That's five games, four of which have come without a goal from a side who continue to struggle in attack, despite a revolving door of loan signings that's seen eight different players start up front this season.

"None has been an unqualified success and the club have fallen steadily down the table to now sit just two points above the relegation zone.

"Turner remains a legend in the eyes of most Town fans having led the club to the second tier of English football in his first spell in charge. And, when he returned, he then led Town to promotion to League One.

"But patience in football remains in short supply and, with the transfer window open and criticism now finding its way to the boardroom too, January has become a huge month for the league's longest-serving boss both on and off the pitch."

But, apart from recalling Connor Goldson back from Cheltenham, just two days after extending his loan, the only deal he has so far done since the January window reopened is to extend Bolton Wanderers striker Tom Eaves' stay until the end of the season.

Turner is still waiting to see if Middlesbrough will extend winger Adam Reach's loan, but striker Gozie Ugwu has gone back to Reading and defender Cameron Gayle has returned to West Bromwich Albion.

And Preston confirmed on Thursday afternoon that midfielder Nicky Wroe has been recalled, with a view to being loaned out to a League Two club.

It all adds up to an uncertain time at Shrewsbury, amidst the current backdrop of rumours about takeovers at the club and speculation among fans that the time might be about to arrive when 66-year-old Turner moves upstairs - and steps aside for a younger manager.

Only 4,194, almost 30% down on their season's average attendance of 5,663, turned up for Tuesday night's 2-0 home defeat by promotion-chasing Leyton Orient.

But Turner, the longest-serving manager in English professional football, is still very much the man at the helm for now.

"What we've got to do is take stock," added Turner.

"There's been a lot of work, a lot of phone calls, a lot of efforts to bring people in. That doesn't change.

Turner's only immediate concern is preparing for this Saturday's trip to MK Dons where Town will be looking to extend their recent much-improved away record.

"We've got to prepare now for this MK Dons in a professional manner and make sure that spirits are lifted, not dumbed down," said Turner.

"The players are depressed enough. They don't need me down their throats.

"What they need now is lifting in preparation for MK Dons so we can go down there with the belief.

"But we've taken seven points out of nine from the last three away matches."

Meanwhile, Andrew Pugh, Shrewsbury Town's finance and general manager, is to leave at the end of the month to take up a role as head of finance at Walford and North Shropshire College, based near Oswestry.