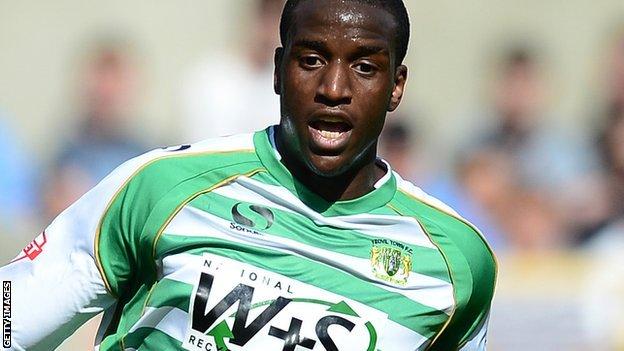 Liverpool have loaned reserve striker Michael Ngoo to League One club Walsall for the rest of the season.

Ngoo, 21, who scored five goals in 16 games while on loan at Hearts last term, ended a season-long loan deal at Championship side Yeovil in October after only three months.

"Michael is a lad I've been watching for a long time," said Walsall manager Dean Smith.

"He is the right calibre and profile to fit into what we're trying to do here."

The 6ft 6ins striker, who moved to Anfield in 2009 after coming through the youth ranks at Southend United, was part of the England's Under-20 World Cup squad in Colombia in 2011.

Although he failed to score in seven games for Yeovil, starting just twice for the Championship club, he was much sought after, with Walsall's divisional rivals Swindon Town trying to tie up a deal earlier in the month.

"Technically, he is very good and will improve what we have already got here. On top of all of that, he is also a good character and someone I'm looking forward to working with.

BBC Radio WM's sports team will be on air until 23:50 GMT (95.6 FM and online) with news of any late transfer window deal involving local clubs.